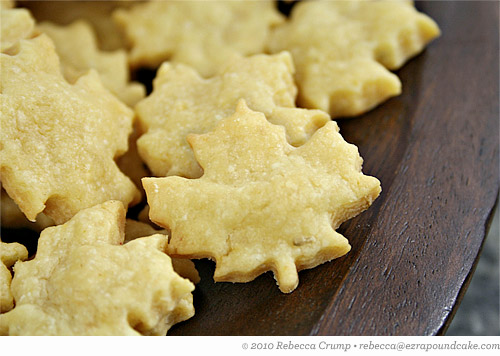 Remember those leaf-shaped pie crust cutters you bought a few years ago, probably in a Martha Stewart-induced haze? The ones meant for creating a glorious, swoon-worthy wreath of maple leaves around your Thanksgiving pumpkin pie?

Yeah, THAT wasn’t fun. Racing to cut the pastry leaves. Meticulously arranging them around the pie plate only to step back and see that they were slanting in two directions. Ultimately realizing that those leaves were destined to be buried under a mountain of Cool Whip  …

This year, I’m making something much easier with those pie crust cutters: Cheese Crackers!

Just follow the recipe for Cheese Straw dough in my post on Cheese Straws, the ultimate retro Southern party food. Roll the dough on a lightly floured surface until it’s 1/8-inch thick, and cut as many leaves as you can. Transfer the leaves to a baking sheet lined with Silpat®, and chill them in the fridge for three minutes. Then bake them at 350 degrees F for 12 to 15 minutes, until the edges are barely browned.