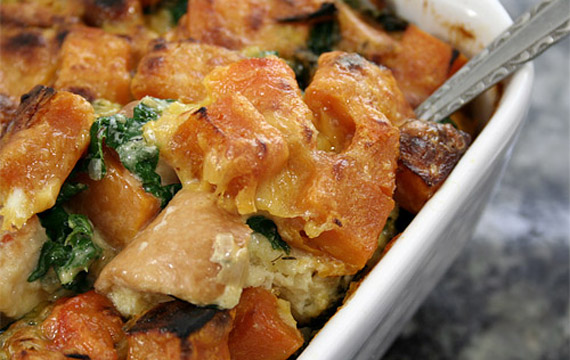 A few weeks ago, Brandy messaged me on Facebook with a great question: What could she make for her newly vegetarian sister’s Thanksgiving meal?

First, kudos to Brandy for not assuming that her sister would either a.) eat tofurkey or b.) just make a meal of the Thanksgiving sides. I know, the side dish idea works in theory, because it seems like the autumnal version of the summer vegetable plate. But think about our favorite Thanksgiving sides. Not exactly clean eating. Many are cooked, seasoned, moistened or sprinkled with meaty things, so they’re out. And you can’t ask someone to make a meal out of sweet potato casserole, cranberry sauce and Sister Schubert rolls. That’s just wrong.

So, over the next few weeks, I’m going to be posting some Thanksgiving vegetarian entrees – things that are seasonal and substantial  – starting with this slight adaptation of Molly Wizenberg’s Butternut Squash, Kale and Cheddar Bread Pudding. You start with cubes of bread that have been soaked in a savory custard, and layer them with sautéed kale and shallots, cubes of sweet roasted squash and several large handfuls of extra-sharp cheddar cheese. Then you pour the remaining custard over the pudding, and count the minutes until it comes out of the oven, all baked and golden, full of flavors and textures that shouldn’t make sense together but do.

You just can’t say the same about tofurkey.

This pudding is even better the next day, so feel free to bake it and let it rest in the refrigerator overnight before you dig in.