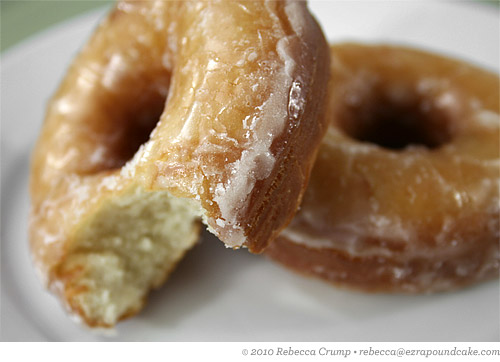 When Mama was a little girl, she could tell when Mommaw had been making doughnuts as soon as she got off the school bus. It was the smell. The smell of dozens and dozens of fresh, hot homemade doughnuts, cooling on every surface in the kitchen, welcoming her home.

My sister is about six months pregnant, and when Mama told her that story, it ignited something primal in her. A hormone-induced, mother love-inspired, all-consuming drive to learn how to make doughnuts so that when her babies get off the bus THEY WILL KNOW THEIR MOTHER LOVES THEM! And I don’t blame her one bit. I love that image, too.

Actually, I made this batch of Delta Cream Doughnuts on my own so that I could troubleshoot the recipe before I got Jennifer involved. She fears the yeast. And the hot oil. So, as her big sister, I felt a certain obligation to quiet her fears by dealing with these things first. I deal with the doughnuts; she deals with the childbirth. I’m making out like a champion.

Delta Cream Doughnuts are yeast-raised doughnuts. Many people avoid baking with yeast, because they’ve either had a bad experience or heard of one. You know, so-and-so didn’t know his yeast was bad and baked a batch of croissants that came out like hardtack. The thing is, it’s really easy to tell whether your yeast is good before you add it to the rest of your ingredients. Just combine your yeast with warm water, and add a teaspoon of sugar to “feed” the yeast. After three or four minutes, fresh yeast will start to rise and look foamy. If your yeast just looks like granules sitting in water, it’s dead. Don’t use it.

Once you make the doughnut dough and chill it for at least three hours, you’re ready to cut out the doughnuts. I couldn’t find an actual doughnut cutter, so I used my biggest biscuit cutter and cut holes in the doughnuts with the open end of a cake decorating tip. Then I placed the doughnuts on a baking pan to let them rise.

I have the most luck with getting dough to rise when the climate in the kitchen feels like you’re trapped in Satan’s armpit. Uncomfortably warm and humid. This time of year, that requires a little cheating. You can kick up the thermostat, turn on the oven to warm up the kitchen, run the dishwasher, or wash the dishes in the sink while the doughnuts are rising. One of the easiest things you can do is simply to make sure you don’t have a ceiling fan or an open window creating a draft in your kitchen. You could even slide the doughnuts into your oven (with the oven turned off).

I know that most recipes say how long to let the dough rise, but that’s just a guide. Use your eyes and your fingers. If the dough has doubled in size and feels light and airy, it’s ready. If it looks the same as it did when you put it on the baking sheet, give it time. Your dough might take twice as long to rise as a recipe states.

When your dough is ready, it’s frying time. If you’re going to be frying the doughnuts in a heavy-bottomed pot on the stove top, place a candy thermometer in the oil, and set the heat to medium. You want to gradually heat the oil to 365 degrees F. Yes, it will take a little while, but you don’t want to crank the dial to high. Seriously. The super-hot oil can shatter your thermometer. Don’t ask me how I know that.

While the oil is warming, you can set up your frying station. You’ll need a wooden spoon (the handle is perfect for getting the doughnuts into and out of the hot oil) or a wooden dowel, a baking sheet lined with paper towels and topped with a cooling rack, and your doughnut glaze. Then, you can ease a few doughnuts into the oil, flip them when they get to your preferred shade of golden brown, and place them on the cooling rack to drain. When the doughnuts are cool enough to handle (but still warm), you can dip them into the glaze and place them back on the rack to set up. Or shove them into your mouth. I’m not judging you.

These doughnuts really remind me of Krispy Kreme’s, especially when they’re as hot as you can handle. And the glaze dries to a finish as smooth as glass. I like to let mine cool just a little and pop them into the microwave to get that Krispy Kreme-like crackly finish on top, and that’s what you see in the photo above.

Why are they called Delta Cream Doughnuts? Martha Foose Hall created them based on the deep-fried doozies at a place called Delta Kream. If you’ve been there, I’d love to hear about it.

So, Jenn, it’s time to make the doughnuts! We’ve only got five years or so before the littlest one starts getting off that bus.