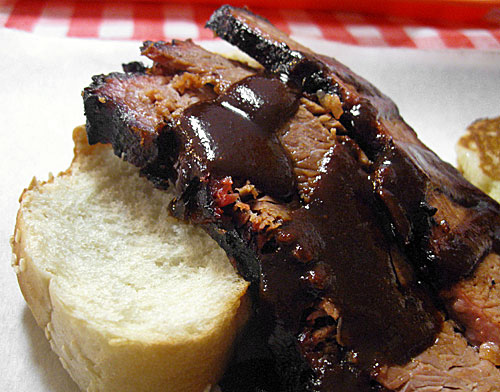 I’ve never been a missionary. When I was baptized, the thunder clapped outside, and I laughed so hard when I came up, I probably need a do-over. But when I saw that Martin’s Bar-B-Que Joint hadn’t been named “Best Barbecue” in the Nashville Scene’s annual “Best Of” issue, I knew it was time to spread the gospel. Because even if you don’t live near Nolensville or barbecue isn’t your thing, there are three big life lessons you can learn from Martin’s:

1. Go whole hog. Get passionate about what you’re doing. A lot of barbecue places – a lot of workplaces in general – phone it in, but when you go to Martin’s, YOU get excited about the barbecue, because they’re excited about the barbecue. It’s contagious. Just read Pat Martin’s blog about starting and running the business. Do you have any idea how much chicken and brisket Jeff has smoked in the backyard since he got bitten by the Martin’s Barbecue Bug? The dog and cat hide when the tongs come out.

3. Step up your game. Everything at Martin’s is better than it has to be. Most barbecue joints have menus that begin and end with the same-old sandwiches and plates; Martin’s is also home of the 10-inch “Porter Wagoner” hot dog, the Redneck Taco and Habanero Bread Pudding, which is sold out so often I’m starting to think it’s a myth. I’ve never been to a cleaner, friendlier, more fun barbecue joint. Even the sides are amazing. Today, we tried the cornbread for the first time, and if Martin’s were any closer to our house, I’d start forwarding Jeff’s mail there.

A few years ago, I used to tally votes for our local “Best Of” issue, so I know that the chains tend to win. They’ve got the name recognition. But Martin’s barbecue isn’t just something you crave, it’s inspiring. And inspiration trumps drive-thru any day. 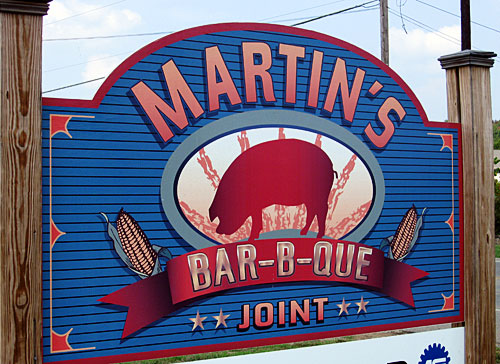