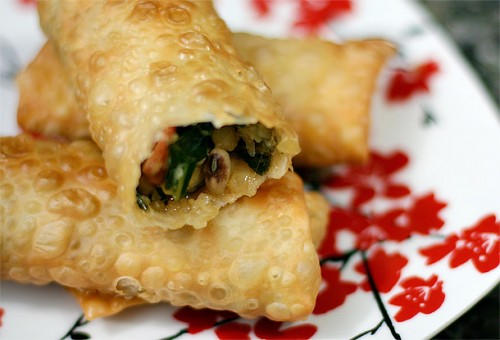 Yesterday, when the cashier at Publix scanned my black-eyed peas, she asked me why people here think that it’s lucky to eat them on New Year’s.

The story is that when Sherman’s troops came through during the Civil War, they burned or stole most of the livestock and crops, leaving the people to starve. Only one crop was left behind, the lowly black-eyed peas, which had been raised to feed livestock. Who would eat them? So, many Southerners survived by the grace of those black-eyed peas.

Now, we say, “Eat poor on New Year’s, and eat fat the rest of the year,” because we believe that if you eat black-eyed peas on New Year’s Day, you’ll have prosperity all year long. The more peas you eat, the richer you’ll be. Most people serve them with a mess of greens, ham and cornbread, or they make a big dish of Hoppin’ John or Texas Caviar. But this year, I’m making Southern-Fried Egg Rolls.

I know, the idea sounds insane. But with every bite, you get a mouthful of black-eyed peas and collard greens mixed with smoky bacon, sweet Vidalia onion and melted Gruyere swaddled in crunchy, deep-fried goodness. The perfect New Year’s party food.

You don’t need luck when you have bacon.

P.S. If you’ve never folded egg roll wrappers, don’t let that scare you. Most egg roll wrapper packages come with a folding diagram, and there are videos online that can show you exactly how to do it. And, if you screw up the first two, you are in excellent company. Hint: Place the wrapper in front of you like a diamond, not a square.

Adapted from Taste of the South’s “Christmas Cooking: Southern Style”

To make this a meatless recipe, omit the bacon and sauté the onion in 3 tablespoons of canola or vegetable oil instead of bacon grease.