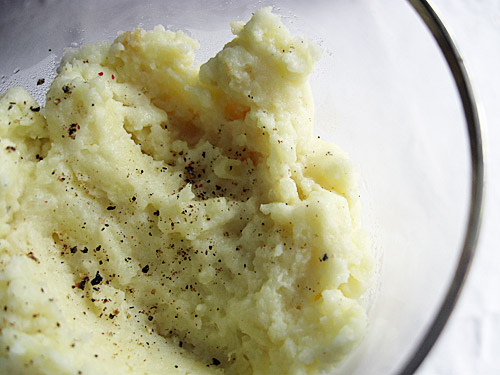 Whether you’re looking for a good make-ahead holiday side or you have a deep-seated fear of mashing taters, this is the recipe for you: Blue Willow Inn’s Holiday Mashed Potatoes.

Because, and I can’t stress this enough, there’s no room for error with mashed potatoes. They’re your fallback food, the one side everybody loves. The buoy they’ll reach for in a sea of cranberry-pear this and roasted squash that. We are hard-wired to love mashed potatoes.

In “A Christmas Story,” what does Randy stick his face into and snort at the dinner table? Mashed potatoes.

What does John Belushi stuff into his cheeks in “Animal House”? Mashed potatoes!

Is there a dance called the Cranberry Sauce? Or the Green Bean Casserole? Nooooooo! I believe the only side dish to hold that honor is the Mashed Potato.

What I’m saying is, when it comes to making mashed potatoes for a holiday meal, you have to BRING IT.

I love the Blue Willow Inn’s Holiday Mashed Potatoes, because you can refrigerate them overnight before baking them – or you can freeze them. Plus, they taste like the filling of a twice-baked potato, with a nice golden crust that reveals a velvety mixture of cream cheese, butter, sour cream, a little onion and … potatoes. The perfect mashed potatoes for snorting, stuffing, sculpting and satisfying everyone at your holiday table.