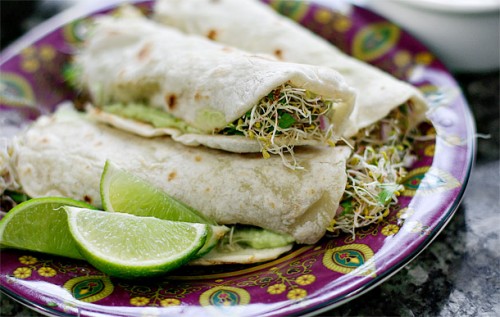 Being sick for the first two weeks of the year gives you plenty of time to think about how you’d like the next 50 weeks to go.

My Sudafed-fueled brain kept focusing on all of the ones in this year. Four dates with all ones. That has to mean something, right? Shouldn’t it mean something? And then I’d take a nip of Nyquil and watch another episode of “The Fabulous Beekman Boys.”

Anyway, all of those ones got me thinking that 2011 would be a great year for “firsts” – for making as many new things as possible – starting with the flour tortillas I used for these Cucumber and Alfalfa Tortillas with Guacamole.

Have you made flour tortillas before?

The process is a cross between making pie dough and pancakes.

I didn’t have much hope when I put my first wannabe tortilla in the skillet. It was raw and thin and had no personality whatsoever. But after a few seconds, it started to bubble and blister and OMG, IT LOOKED LIKE A TORTILLA!

However, even a stack of homemade tortillas is pretty meaningless without a good topping or filling. This recipe calls for each tortilla to be spread with a heaping spoonful (or two) of guacamole and filled with a chop-and-toss combination of alfalfa sprouts, cucumber, red onion and cilantro. So, you’ve got the slightly crusty homemade tortilla, the creamy avocado and then all of this crazy texture from the cucumber and sprouts. I like to roll mine up, but you could fold them in half for soft tacos.

Now that I’m thinking about all of the things I want to make for the first time, I’m really excited about the new year. Besides, I’m all caught up on “The Fabulous Beekman Boys.” Time to get 2011 started.

Cucumber and Alfalfa Tortillas with Guacamole