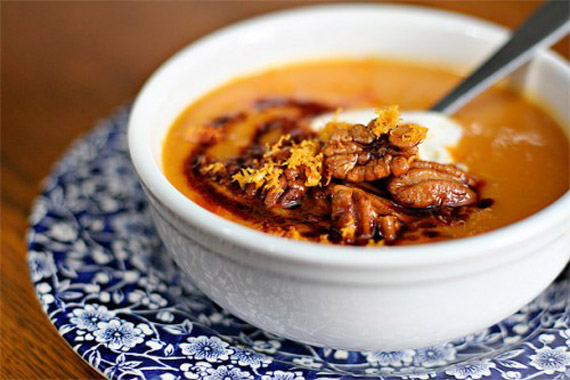 “To paraphrase Cher … sooner or later, we all eat alone.” – Joe Yonan, “Serve Yourself: Nightly Adventures in Cooking for One”

We talk a lot about cooking for other people, but sometimes I really, really like to cook just for myself.

There’s something nice about being alone in the kitchen, singing along with the Stones’ “Tumbling Dice,” not worrying about anyone’s hunger (or food quirks) but my own.

I love cooking for and with Jeff, but there are certain foods he will not abide (a.k.a. “produce”), so I’ve learned to really indulge myself when I eat alone. Which, lucky for me, comes every day at lunchtime.

And I’ve found a like mind in Joe Yonan, who writes the monthly column “Cooking for One” for The Washington Post. His new cookbook, “Serve Yourself,”

is full of mostly single-serving recipes for people who like to cook but don’t want to be buried in leftovers. Singles. Spouses who work different shifts. And people like me, who love foods that their significant other shuns. Like mushrooms. Or avocado. Or, yes, sweet potatoes.

Today, I made Yonan’s Sweet Potato and Orange Soup with Smoky Pecans.

I expected it to be slightly sweet and fruity, a liquid sweet potato casserole, but this soup is nothing like that. The base is savory, a velvety mixture of roasted sweet potato, carrot, celery, leek, stock and thyme, with a pinch of curry powder for complexity. The orange juice doesn’t sweeten the soup. It brightens the flavors. Like adding a squeeze of lemon to a plate of grilled vegetables.

While the soup is heating on the stove, you toast the pecans, add a tablespoon of olive oil to the pan, and stir in some smoked paprika. The paprika turns the oil red and coats the pecans. Gorgeous.

To serve the soup, you layer all of these flavors. First, you fill your bowl with sweet potato and orange soup. Then, you add a nice big dollop of sour cream or Greek yogurt. Finally, you top the soup with the pecans and spiced oil, and sprinkle the whole thing with orange zest for a little extra zing.

Every bite gives you a little something different.

In fact, Yonan’s sweet potato soup base was made for experimentation, so every bowl could give you something different. Measure out a one-cup serving of the concentrated base; thin it with water, stock, cream or orange juice; and add delicious things. Toasted pecans. Mushrooms. Chickpeas. Kale. Chorizo, on a day when you’re not going meatless.

I could freeze the sweet potato soup base in individual portions, but with snow in the forecast and so much variety at my beck and call, I’m pretty sure that soup will be on my lunch menu until the bowl runs dry.

Note: I received a review copy of Joe Yonan’s “Serve Yourself,”

which is available in bookstores starting March 29, 2011.

Courtesy of Joe Yonan’s “Serve Yourself: Nightly Adventures in Cooking for One”