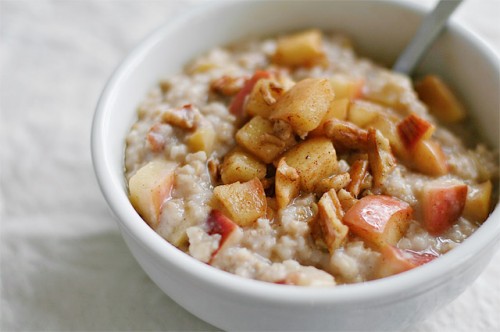 I’m really not one to swoon over a bowl of oatmeal.

If oatmeal were really an orgasm in a bowl, then that Quaker would have a bigger smile on his face.

But I decided to try Jillian Michaels’ Steel-Cut Oats with Apples and Pecans, and I’ve eaten a bowl first-thing for 23 mornings in a row. Oats simmered in almond milk, sweetened with maple syrup and studded with cinnamon-spiked apples and toasted pecans. Just the right balance of creaminess and crunch.

When I realized I wouldn’t have to give it up for my week-long Vegan Challenge, I was actually excited. That’s how much I love this oatmeal.

It might not be an orgasm in a bowl, but it definitely qualifies as foreplay for a good day.

Steel-Cut Oats with Apples and Pecans

If you have leftovers, reheat the oatmeal, add a little more almond milk, and stir it in for maximum creaminess.

21 thoughts on “Steel-Cut Oats with Apples and Pecans”