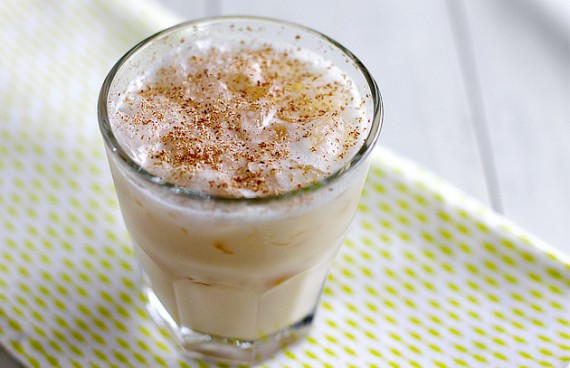 Milk Punch sounds like something that might be sipped by the elderly members of a ladies sewing circle as they quietly share their prayer lists, but don’t let the name fool you. All of that milk, sugar and vanilla disguises a liberal helping of brandy or bourbon.

Think eggnog without those pesky eggs. Cold and sweet, with a little nutmeg on top.

Most Southerners think of Brandy Milk Punch as a Christmas indulgence, but New Orleans has the right idea. There, you’ll find it served year-round, mainly as a brunch cocktail or one hell of a milkshake.

I’m including two recipes here, one for a classic Brandy Milk Punch and the other for the Frozen Bourbon Milk Punch declared top dog at the 2010 Tales of the Toddy event in New Orleans.

This Brandy Milk Punch is blended with crushed ice, but you could also chill the ingredients in the freezer for three hours or so (letting them get slushy on their own) or pour the mixture over ice, depending on your personal preference.

The Frozen Bourbon Milk Punch is very similar, but this Bourbon House recipe uses bourbon instead of brandy and includes a few scoops of vanilla ice cream. It could be the most decadent milkshake ever slurped through a straw. A dessert and a nightcap, all in one glass.

Much too much pleasure for once a year. Even the ladies sewing circle would agree.

From John Besh’s “My New Orleans”

This recipe was voted Best Bourbon Milk Punch at the 2010 Tales of the Toddy event in New Orleans.

Adapted from Barry Himel of Bourbon House, New Orleans (via The Times-Picayune, Dec. 17, 2010)

One thought on “Brandy Milk Punch”