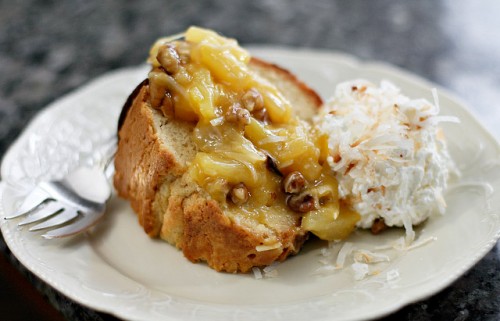 In just a few months, when we’re all sweating and swatting mosquitoes big enough to rape chickens and there’s not enough deodorant IN THE WORLD, I might regret saying this, but THANK GOD FOR THE SUNSHINE.

That marathon of gray, gloomy rainy days put me into a serious funk. Not the good Bootsy Collins kind of funk, where you feel like strutting around in star-shaped sunglasses and sparkly thigh-high platform boots. No, the blah funk. The doldrums. The down-in-the-dumpalumps. The kind of funk that lulls you into watching the season premiere of “Ruby.”

The cake is light and tender, but there’s an intense shot of rum in the batter, as well as the rum soaking syrup you brush onto the top. If you really want to take that rum flavor over the top, double-up on the syrup and brush some onto the bottom of the cake before you flip it out of the pan. Then, grab a toothpick and pierce the top of the cake so the soaking syrup can really get down into each slice instead of resting on the top.

While the cake is cooling, you can toast the coconut and pecans in the oven and make the pineapple sauce. The base of the sauce comes together quickly on the stovetop – just pineapple chunks, orange juice for brightness, cornstarch, a little sugar and the secret ingredient: ginger. The ginger really wakes up the flavor of the sauce and gives you something unexpected. When you combine the thickened sauce with the toasted coconut and pecans, you have a uniquely chunky, chewy, crunchy fruit mixture that would be as delicious on a scoop of vanilla ice cream as it is on this pound cake.

And once you’ve made a cake and some pineapple sauce to go with it, you might as well take it to the bridge and whip up some whipped cream. I flavored it with rum, because I’m a slave to symmetry, but you could use vanilla, coconut extract, maybe a little orange zest. If you’re feeling really decadent, add a spoonful of rum or vanilla whipped cream to the coffee that accompanies your cake. (Or the next morning’s Fruity Cheerios. I’m not judging you.)

Seriously, it’s so good to finally shake off the blahs, and if you’ve been going through a rainy-weather depression, I hope you’re starting to feel like yourself again, too. That little sting you just felt? That was me giving you a virtual booty smack. Now, let’s grab our star-shaped sunglasses and let our freak flags fly.

You’ll be filling your Bundt pan only three-quarters full, so you’ll probably have leftover batter. If you’d like, you can bake the leftover in cupcake tins or brioche pans for about 18 minutes.