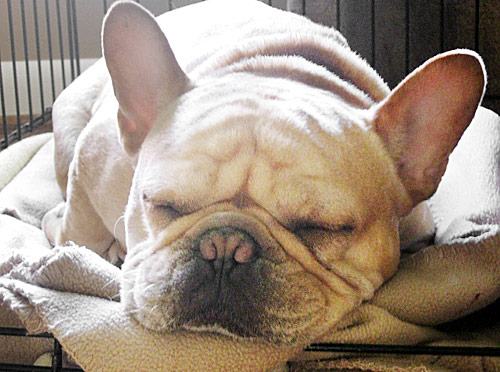 Oh, look, there’s Henry the Wonderdog. Let’s pretend he’s been lulled to sleep by a pot of cinnamon sticks, orange peel and cloves simmering on the stove as I lovingly create Thanksgiving decorations out of pinecones, acorns and giblets. Because that is so not what’s happening.

Today, Henry’s snoring away while I get our house ready-to-get-ready for the holidays. Straightening, dusting, sweeping, mopping, vacuuming, wondering if there’s laser hair removal for pets and running the hose upstairs to pressure-spray the kitchen. Because it’s so embarrassing when the Christmas tree sticks to the floor.

But before I scrub the toilets, I thought I’d answer some of the questions you’ve e-mailed and posted in the comments section. If you have more, please send them to [email protected] Embarrassing myself trumps toilet-scrubbing any day.

“Any chance of getting invited to your next family gathering? It sounds like you folks know how to eat.”

There’s always room for more at the table, but you should know we have a sacred tradition called “Ruining the Meal.” It’s a friendly post-dessert competition to see who can say something tacky, gross, vulgar and/or disturbing enough in the course of regular conversation to make everyone else leave the table. My brother-in-law, Taylor, says he’s bringing it this Thanksgiving. We’ll see.

“Is Henry the Wonderdog back to normal since his operation?”

Yes, Henry’s eye has healed, and he’s back to a rigorous schedule of napping and eating. The last week he had the plastic collar, I knocked some cake scraps off the counter, and he caught them with the collar. Have you ever seen a dog funnel red velvet cake? It was like the woodchipper scene in “Fargo.”

“Did you really get rid of the Rocky T-shirt?”

No. Jeff has hidden it. WHAT AM I GOING TO WEAR FOR THANKSGIVING?

“Why are your cat and dog both named Henry? Isn’t that confusing?”

Jeff had Henry the Cat and I had Henry the Wonderdog before we started dating. It’s a total weird coincidence. And, yes, it is confusing, especially when one of them gets mail.

“Where would I get orange blossom water? Potato starch? Grits? That ‘adorable little chile’ on top of the Spiced Chocolate Bread Pudding?”

Orange blossom water could be in your grocery’s Indian/Middle Eastern food section or in the baking aisle, near the vanilla. Potato starch should be near the cornstarch. Grits tend to congregate with oatmeal. And the chile on top of the bread pudding was a Thai chile from the Whole Foods produce section.

“Your bad blind date really didn’t give you a grilled cheese sandwich?”

No, honest to God, his mommer brought him a grilled cheese and tater tots ON A TRAY and didn’t even make eye contact with me. However, I did parlay this moment of extreme awkwardness into a first-place win in my local radio station’s “Worst Date Ever” competition.

“Did anything/anyone ever eat the lasagna you tossed into the alley?”

You know, I’d never thought about it, but a few weeks later, I opened my apartment door, and a huge, hissing opossum was facing me on the doorstep. Coincidence? Maybe not.

“Do you walk into walls while looking at them? Because I do.”

Are you psychic? My dad likes to call me “Grace,” because I have none.

“Are your dishes from Williams-Sonoma?”

Yes, we use the WS Everyday Restaurant Dinnerware. I read about the glories and benefits of all-white dinnerware in “Bon Appetit” right before I filled out my bridal registry, and I was very, very influenced. But I love these dishes. They’re beautiful, practically unbreakable and completely oven-safe. I love baking things like hot chocolate cake in the mugs instead of breaking out the ramekins. Whenever I can be stylish AND lazy, it’s a good day.

“So, where’s a picture of the penis cake?”

I didn’t post the Member of Unusual Size, but if you really want to see it, e-mail me at [email protected]