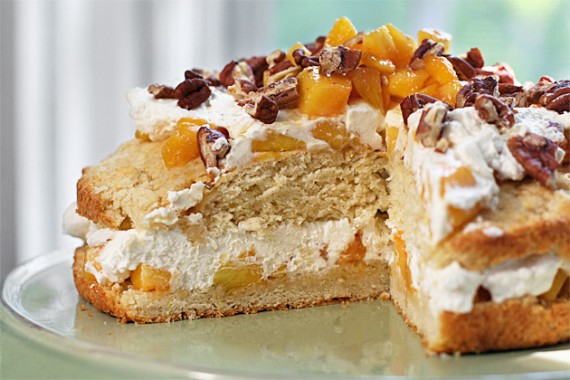 I like to think that, on the 15th or 16th day of Creation, God said, “If you’re willing to put up with mosquitoes, chiggers and feeling like you’re in Satan’s armpit for four months of the year, I’ll give you peaches.”

And Eve said, “If I can get a bottle of Benadryl and a few scrunchies, done and done.”

She really should have bartered relief from underboob sweat, but at least she made the deal.

There’s nothing like a ripe peach. They lure you in with a scent that’s all sweetness and sunshine, and they taste like 1,000 lazy summer afternoons. Downright seductive.

There’s a reason why I call my favorite honey-peach ice cream “Peachgasm.”

So, when I saw this recipe for Peach Shortcake in Martha Hall Foose’s new cookbook, “A Southerly Course,”

I knew she had my number.

The shortcake is one huge, brown sugar-sweetened biscuit, split and filled with whipped cream and fresh peaches – peaches flavored with brown sugar, bourbon and ginger – and topped with more of the same, as well as a handful of toasted pecans, sprinkled on top like confetti.

The ginger really makes the peaches sing, so when you spoon the peaches onto the cake layers, don’t even think about using something slotted and missing out on all of that lovely syrup pooling under those peaches. The shortcake might seem fragile at first, but it’s made to soak in all of that syrupy goodness and cradle the peaches and whipped cream in lusciousness.

One slice makes four months of underboob sweat seem like a small price to pay.