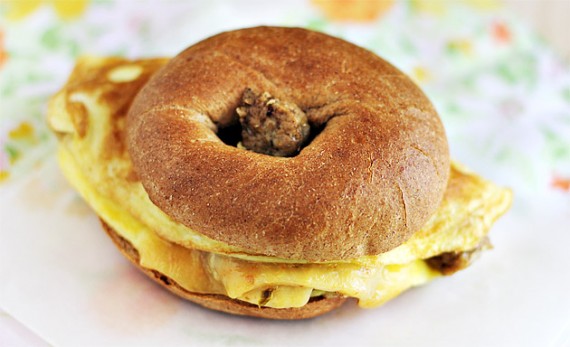 Before Jeff and I got married, I had this fantasy that we’d eat breakfast together every day.

Are you done laughing now?

Instead, I send him to work with a Sausage, Egg and Cheese Breakfast Bagel Sandwich. A turkey sausage and cheese omelet on a whole wheat bagel. I can knock one out in about five minutes flat, usually while I’m still half-asleep. The way Jeff talks about it, you’d think I served it up topless in hooker boots.

But I only do that on Saturdays.

I’ve been slowly but surely tweaking it to make it healthier. Using two links of turkey sausage instead of three. A whole egg and an egg white instead of two eggs. A half-ounce of cheese instead of a whole one. Little changes that add up.

I actually did the math, and by eating this sandwich instead of a McDonald’s Bacon, Egg and Cheese Bagel, Jeff’s saving 150 calories and 11 grams of fat, besides getting twice the fiber and 8 more grams of protein.

If turkey sausage isn’t your thing, you can trade it for bacon, smoked country sausage, boneless pork chops, leftover pork loin or chicken. Make a vegetarian version by adding mushrooms, sauteéd spinach or onions to the omelet, or make a cheese omelet, and top it with sliced avocado.

And don’t forget the hooker boots.