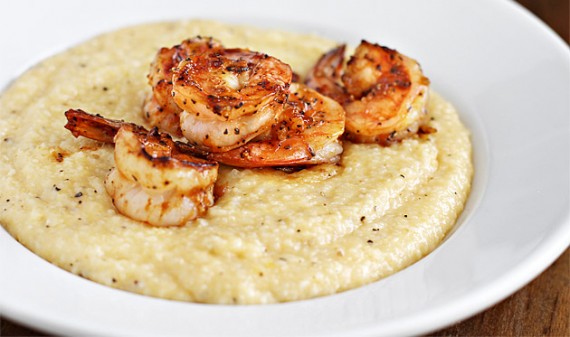 Something about the word “detox” makes me want to slide head-first into a big plate of shrimp and grits. Specifically Barbecued Shrimp and Cheese Grits.

They’ve been on my mind.

I found this recipe a few months ago, before the holidays and our round of Bubonic Plague. Back then, I printed it off and stuck it right in the middle of my planner. A message to my Future Self to MAKE THIS! So, when I was finally well enough to care about what was in my planner, I opened it up and there was my seafood centerfold.

This recipe starts with a homemade barbecue sauce. It’s a tangy ketchup-and-bourbon-based blend that you just toss in a pot and simmer for about 40 minutes. Nothing to it. Then you brush the sauce onto your shrimp just before you grill them. Since shrimp take less than five minutes on the grill, I usually cook them indoors in a grill pan

– one of the handiest pans on the planet – but if you don’t have one (yet), feel free to pan-sear your shrimp over medium-high heat in a big skillet.

As for the grits, you boil them in garlic-infused chicken broth for extra savoriness. Then you get to engage in one of my Absolute Favorite Things To Do in the Kitchen: stirring the butter, cheese and cream into your pot of grits.

Watching the pats of butter and handfuls of shredded cheese melt and disappear into the grits as they get richer and creamier is ridiculously satisfying.

Hedonism at its finest. THIS is the way to start a new year.

Note: The barbecue sauce can be refrigerated for up to a week.

*Gluten-Free Tip: Check the labels to make sure your chicken broth and butter are gluten-free.