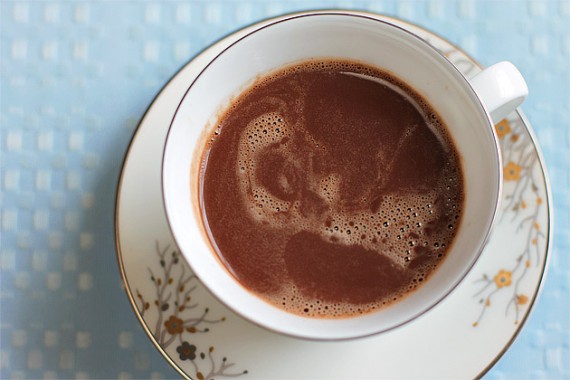 Today, I’m sipping a cup of Boozy Hot Chocolate – a luxuriously silky, cinnamon-spiked hot chocolate laced with a few spoonfuls of rum – and thinking about what kind of advice I’m going to give my nieces about dating.

One’s a year old and the other’s 2, so I’ve got time to get my thoughts together. But I really want to get this right.

After Laney was born, I briefly considered writing my own version of “Snow White” to give to her. One where the Seven Dwarfs would be named for gentlemen who weren’t going to be worthy of her time. Like Angry, Grabby, Crazy-Eyes and Broke-Ass. A tale that would teach my nieces what red flags to look for, so that they might steer their ships through the channel of puberty without fear of pirates raising the Jolly Roger anywhere near their tender masts.

It might have included cleverly disguised parables from my own illustrious dating career, like the one about the musician-boyfriend with the long hair that smelled like Pantene who showed up to a party with another girl and hid behind a tree. Or the man-child who’d invite me over to sit next to him on the couch as he got lost in the world of Zombie Warlords in Space 3. Or the one who said that, if I loved him, I’d leave work and school behind to move across the state and support him while he decided whether he was ready for a long-term relationship.

Lord, spare my nieces such indignities and heartache that they might never need to play Pearl Jam’s “Black” on repeat.

True fact: One of my ex-boyfriends was simply referred to as “The Evil That Has No Name” until I started dating Jeff.

I’m not saying Jeff is perfect. He owns way too many jackets. But he treated me so well that it made me remember the good things about my exes. I could see them for who they were instead of a writing them off as a horde of evildoers. (Incidentally, if any of them are writing a dating fairy tale for their nephews, they should feel free to cast me as one of the evil female dwarfs. Like Bitchy, Needy, Silent Treatment or Premenstrual.)

There will be no book from me.

What then will I tell my nieces about dating?

Everything else is up to you and them, Lord. May they both find true love. But first, may their mistakes be quick and legendary, so that one day they might laugh at them.