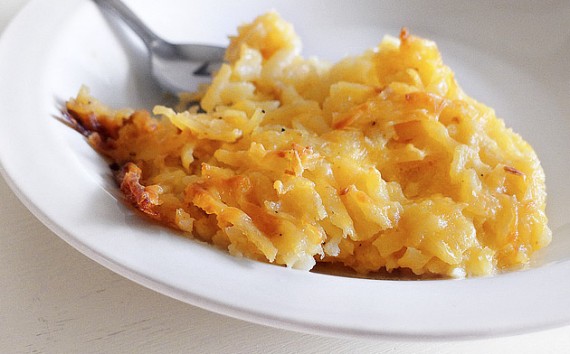 Hashbrown casserole has a hold on me that I can’t explain, so when my sister, Jennifer, offered to give up her recipe, I jumped on it. Make it this weekend!

If I were stuck on a desert island with only one food to sustain me, it would be potatoes. They are the most versatile food in existence – boiled, roasted, grilled, fried, and if all goes to mush, mashed. A vehicle for meat, condiments and other vegetables.

I know my sister feels the same way, because once when we were kids, our parents took us out for Sunday lunch, and I got to witness her ordering a veggie plate with four different kinds of potatoes: fries, potato salad, mashed potatoes and hash browns. (Don’t worry, Mom didn’t stand for it. She told the waiter Bec needed another minute, right before she crawled under the table to hide her face in shame.)

And that brings me to one of my all-time favorite potato dishes: Hashbrown Casserole.

If you’ve ever been to a Southern Baptist potluck (or breakfast at Cracker Barrel), you know the power of this baked cheesy-potato goodness. No one can resist it. And it’s about as simple as casseroles come.

Just combine a can of cream of chicken soup with cheese, melted butter, frozen hash browns and a little chicken broth in a big bowl. (I like to use chicken broth instead of the usual sour cream to keep the casserole moist but not too rich.) Pour the mixture into a casserole dish, sprinkle a handful of cheese on top, and bake.

You could even put the casserole together Saturday night, and bake it Sunday morning.

Much faster than waiting in line at Cracker Barrel.