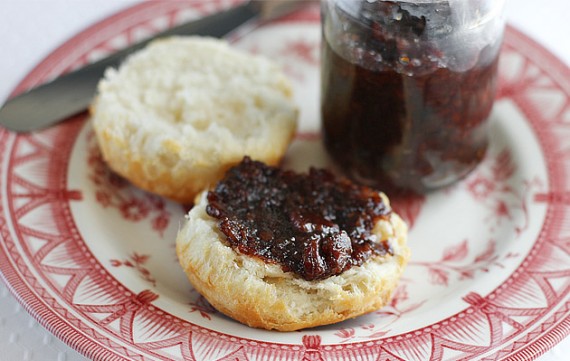 When I asked Rebecca what she wanted me to fix this week, she suggested Bacon Jam.

I was not hopeful.

Martha is not Southern, and jam is for fruit.

But “Bacon Jam” is something worthy of reverence. You should say it slowly (“Baaaaacon Jaaammmmm”) with one hand over you heart, the other raised to the heavens. You might even bow your head, close your eyes, and let a tear of gratitude slowly well up and spill over your cheek.

You should know that this recipe gets side-tracked to the point you want to abandon it, but it does end beautifully. Trust me, and hang in there.

You start by frying up the bacon and using some of the bacon grease to cook your onions and garlic. When the onions are soft, you add vinegar, coffee, maple syrup, brown sugar and the cooked bacon.

WARNING: At this point, you’re going to be tempted to lean down and smell the mixture. DON’T. If you stop to smell, you might smell and stop. The ingredients need time to mellow. Before that, they don’t smell anything but godawful. Approach it like the World’s Worst Poopy Diaper, and power through.

Once the mixture is combined, you put the whole stinky mess in a crockpot, and cook on high with the lid off for four hours.

During that last hour, something magical happens. Flavors meld, vinegar calms down, bacon overtakes, and  The Stank That Would Not Die starts to mellow into something slightly appetizing. By the time it’s done and taken a spin in the food processor, you’ll have to taste it. And then you’ll lick your spoon, and it’ll hit you.

All of those ingredients that didn’t make sense together suddenly make sense together. They’re completely balanced in a jam that’s smoky, tangy, sweet and … bacony. It reminds me of the ugly-but-delicious brown bits you scrape off the bottom of a pan to make a sauce.

So, what exactly do you do with this stuff? You could steal a trick from those gourmet food trucks on TV, and spread a little bacon jam on your burgers. Spoon some into a biscuit, preferably one near a fried egg. Stir it into a pot of soup that needs a little something-something. Or beans. Or cheese dip.

I have yet to find anything that Bacon Jam doesn’t help.

It’s supposed to last a month in the fridge, but that makes me laugh so hard. Bacon Jam lasting a month! That Martha, she’s such a card.