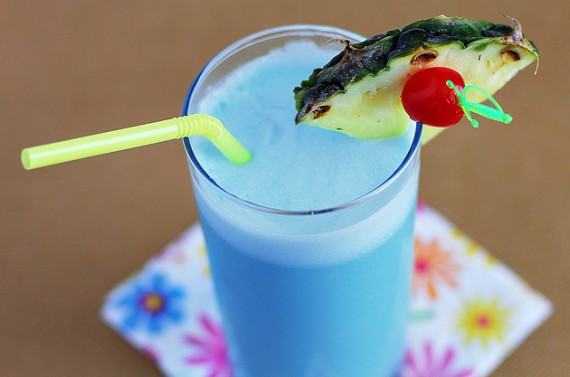 Welcome to Mad Men Week! Every day this week, I’m celebrating the March 25 return of “Mad Men” with a recipe inspired by the show. Because it’s my jam.

Sure, Betty Draper (January Jones) had a good run with her “Trip Around the World” menu in season 2, but since then, she’s been apron-deep in hot dogs and spaghetti.

On the other hand, Joan’s always on top of ’60s food trends. Entertaining buffet-style? Check. Ordering Chinese takeout? Absolutely for the office Christmas party. Jumping on the soul food trend? It’s hard to forget Lane Pryce’s reaction when she asks if he wants a breast or a thigh. (“Both!”)

She’s the one who makes sure the Sterling Cooper men have restaurant reservations at the hottest restaurants in New York.

So, you can’t conjure up a “Mad Men” menu without asking the question, “What would Joan serve?”

And, what would she wear?

Last season, Joan surprised her husband with a surprise Hawaiian-themed brunch for two.

Outfit? A Chinese-style mini-dress with dangling pineapple earrings and a lei.

Menu? Joanie had outdone herself with ambrosia (a fruit salad with orange segments, grated coconut and, in this case, maraschino cherries), a pineapple-glazed ham, biscuits and a bottle of Champagne on ice.

But if you look closely at her table, there’s also a glass filled with a mystery drink she’s been sipping.

It’s got to be a Blue Hawaiian.

The Blue Hawaiian is a variation on the Blue Hawaii cocktail invented by Harry Yee in 1957, when he was bartending in Waikiki. Tourists at his bar were ordering Hawaiian cocktails – only there weren’t really any  – so Yee started inventing them.

Banana Daiquiri? His, too.

He was also the first to start garnishing drinks with fun things, like paper umbrellas and backscratchers.

Bols asked Yee to create a cocktail featuring its new blue Curaçao (“CURE-a-sow”), a blue-dyed liqueur that tastes a lot like orange peel. That’s when he came up with the Blue Hawaii, a mixture of rum, vodka, blue Curaçao, pineapple juice and sweet-and-sour mix.

The Blue Hawaiian is more like a Piña Colada. No vodka. No sweet-and-sour mix. Just blue Curaçao, rum, pineapple juice and cream of coconut.

Blend it with a cup of ice, and you’ve got a sweet, fruity, tropical slush as blue as the ocean.

It’s exactly the sort of new, exciting cocktail a foodie like Joan would stay abreast of.

It’s a drink made for daydreaming.

To work it like our favorite redhead, pick up some tiki accessories (e.g. a stack of leis, a tropical tablecloth and napkins, pineapple anything), wear your best Chinese-style mini-dress, and don’t forget the paper umbrellas.

Note: You can also combine the blue curaçao, rum, cream of coconut and pineapple juice, and pour them into a highball glass filled with ice.