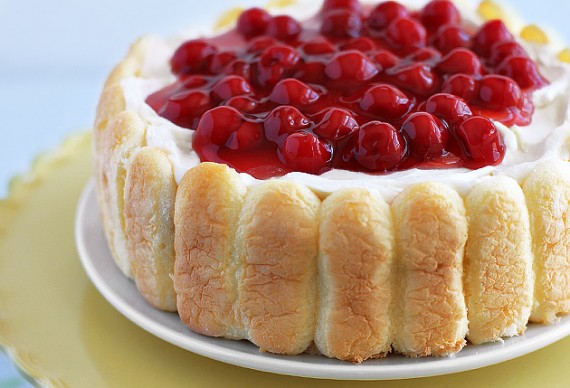 Welcome to Mad Men Week! Every day this week, I’m celebrating the March 25 return of “Mad Men” with a recipe inspired by the show. Today’s No-Bake Cherry Cheesecake was inspired by the slice Joan (Christina Hendricks) and Roger (John Slattery) share at The Tip Toe Inn.

You don’t have to spend all day in the kitchen with a piping bag to get a pretty dessert.

You don’t even have to turn on the oven.

Just make this No-Bake Cherry Cheesecake. It’s a showstopper that sits right at the corner of Loveliness and Laziness, which is exactly where I want to be right now.

Instead of baking the crust, you use a few packages of soft, spongy ladyfingers to line the sides and bottom of your springform pan. Couldn’t be easier. And when it’s time to slice the cake, you can use the ladyfingers as a cutting guide.

Want a small slice? Make your cuts around one or two ladyfingers.

Instead of baking the cheesecake, you blend the filling (i.e. whipped cream, cream cheese, sugar and vanilla) and spoon it directly over your ladyfingers. No baking, no water bath, no chance of the top cracking.

The only hard part is waiting four hours to cut into it.

The sweet, slightly tangy filling perfectly balances the bright red bite of the cherries, and those ladyfingers add a “cakey” element that makes the dessert seem light. Which could be Dangerous and Delightful, another corner where I like to hang.

When I go to the grocery, I never find ladyfingers in the same place twice. They can be with the cookies or frozen foods or hidden in the bakery section. Ask an employee to find them.