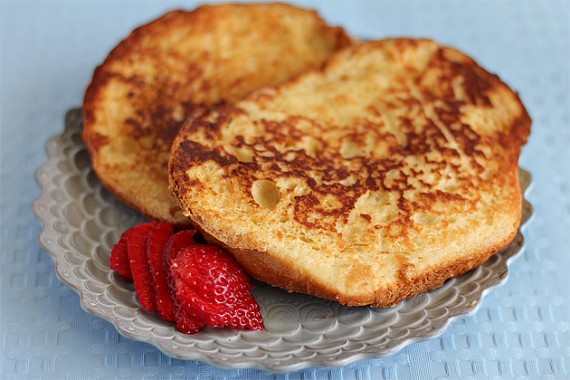 Welcome to Mad Men Week! Every day this week, I’m celebrating the March 25 return of “Mad Men” with a recipe inspired by the show. Today’s Rum French Toast comes from the episode “The Beautiful Girls,” where Sally Draper (Kiernan Shipka) makes French toast for her dad, Don Draper (Jon Hamm), and accidentally tops it with rum instead of Mrs. Butterworth’s. (Don: “That’s rum. Read labels.” Sally: “Is it bad?” Don: “Not really.”)

You know you’ve got a good piece of French toast when it’s delicious on its own.

An eggy piece of French toast needs  syrup, powdered sugar or jam, but a really good French toast is sweet, buttery and crisp by itself.

So, what separates the eggy from the awesome?

If you want really good French toast, you’ve got to disrespect the bread.

Another thing, instead of soaking and frying your bread right away, you’ve got to ignore it. Let it sit for a minute or two on a wire rack to give the custard time to really sink in. Don’t return its texts or phone calls. Just let it sit there. Then the custard will soak all the way into the center of the bread instead of just coating the outside and making it eggy.

Finally, you can’t stop after you’ve fried the bread and pour on the syrup, because it’ll go soggy. You’ve got to dry out that custard. Slide your French toast into the oven, and bake it for five minutes. That extra cooking time sets the custard in the bread, so you get French toast that’s nice and crisp on the outside, creamy on the inside. Instead of chewy and soggy and sad.

For a quick next-day’s breakfast, mix up the custard and refrigerate it before you slice your bread.

If rum is your thing, you’re in luck, because this recipe has rum not only in the custard but in the syrup. Just grab a saucepan to warm your maple syrup, and add the rum to your liking. It gives the French toast a nice boozy kick that’ll get your morning party started.

P.S. Planning to serve it for a party? Steal a page from Martha, and serve the syrup in shot glasses. A shot glass full of maple-rum syrup is a Totally Good Thing.