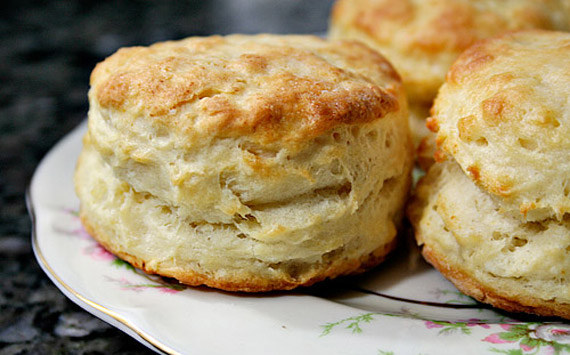 Last week, I read that you should only have biscuits once a year. From a nutritional standpoint, I’m sure that’s true, but since when do the rules of nutrition and “should” apply to biscuits? I can only assume the writer’s never had the pleasure of waking up to a fresh-from-the-oven, hot homemade buttermilk biscuit, split and dripping with butter and honey, oozing strawberry jam, or packed with sausage or country ham.

My latest biscuit obsession is Scott Peacock’s recipe for Hot Crusty Buttermilk Biscuits. They come out of the oven golden on the top and bottom, tender on the inside, with a nice snap from the outside crust and a little tang from the buttermilk. I can’t wait to try his suggestion for topping one with “sautéed asparagus and mushrooms and a runny poached egg.”

That’s living in the high country.

You’ll notice a few unusual things about the recipe.

If you have your ingredients and equipment ready (your mise en place) before you start, you will love the process of making these biscuits. Just work quickly, get them into the hot oven while the fat’s still cold, and you won’t believe you actually made the awe-inspiring wonder that comes forth. So golden. So buttery. So warm. Just don’t grab the last one if there’s a power outage. You might end up with a fork sticking out of the back of your hand.

P.S. If you’d like to see a video of Scott Peacock making these biscuits, you’ll find his “Today” show demo here.

Adapted from Scott Peacock’s “The Art of the Biscuit,” reprinted in “Best Food Writing 2008”

Sift together three times the following: 1/4 cup cream of tartar and 2 tablespoons baking soda. Transfer to a clean, dry, tight-sealing jar. Store at room temperature, away from direct sunlight, for up to four weeks.