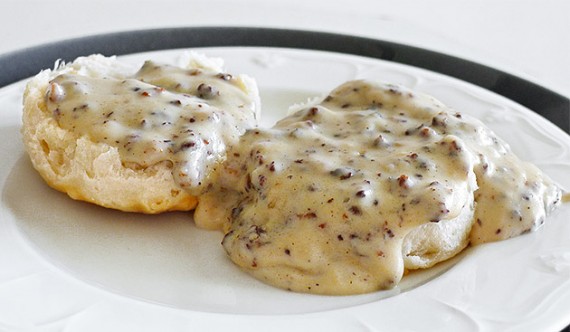 My sister, Jennifer, is here with her husband Taylor’s recipe for Sausage Gravy, which a lot of Southerners call “Sawmill Gravy” – most likely because it was cheap eats for Appalachian sawmill workers. But slather it on some open-face biscuits, and you’ll be living large. – Rebecca

Husband and I dated for about 20 minutes before we got married.

He was The One.

I knew it, and blessedly he knew it, so there was no waiting to figure anything out. As a matter of fact, he wanted to get married the week after he proposed. Our compromise was that, if he planned it, I would get married whenever he set the date.

He called me back in an hour. We were getting married in two weeks in the mountains. He’d already rented cabins (for us and family members), scheduled his tuxedo fitting and rented a car. All I had to do was hurry up and get a dress.

So, since we did not have an extended courtship, there were things I did not know about my betrothed. He pees outdoors, a lot. He eats cereal at 1:15 a.m. And the man can make Sausage Gravy.

Sausage gravy is supposed to be one of the easiest things in the world to make, but I’ve never been able to do it. It’s the process that guarantees success or failure. Shalom or shellac.

Husband, however, can throw down. His sausage gravy is creamy and flavorful, and he unerringly makes the perfect amount. So, I begged him to show me his Jedi gravy tricks, and he agreed to spread the knowledge.

First, he browns the sausage in a big, deep cast-iron skillet. Pigs nowadays don’t have enough fat on them for rendering, so Husband always adds bacon drippings.

Once everything’s browned up, he adds the flour and lets it “soak up the fat” until it’s brown. Then he adds the milk and whisks it with a fork. (He says it has to be a fork.) From there, he adds pepper and sugar, never salt.

It’s been almost six years since our whirlwind wedding, but I’m still learning things about Husband. He’ll let an empty coffee cup sit on the counter until it turns into a science experiment, and he can’t turn the channel past any movie in the “Die Hard” franchise. But on Sunday mornings, when he makes sausage gravy for everyone and lets me sleep in, I still feel lucky to have found The One.

From Jennifer Rather (Ezra Pound Cake)