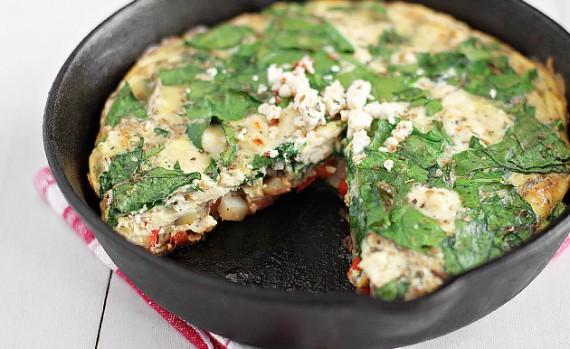 Eating vegetables in the summertime is easy, when the ripe tomatoes taste like sunshine and Silver Queen corn is the only side you need. But “eating a rainbow” in early spring is tough. I’m just not sophisticated enough to crave artichokes, celery root or fiddlehead ferns.

I prefer my carrots with cream cheese frosting.

But I have found a suitable, even craveable, veggie delivery system for spring: this low-carb, vegetable-packed Greek Frittata. It’s a skillet full of onion, mushrooms, potato and red bell pepper sautéed in olive oil and topped with four lightly beaten eggs, just enough to bind the vegetables together. The eggs are combined with wilted spinach, which makes a pretty green canopy on top of the dish, as well as a handful of tangy crumbled feta and oregano, which flavor the vegetables all the way to the bottom of the skillet.

A wedge of something this healthy for breakfast or lunch, and you won’t have to feel nearly as guilty about those sweet potato tater tots.

Adapted from Jillian Michaels’ “The Master Your Metabolism Cookbook”