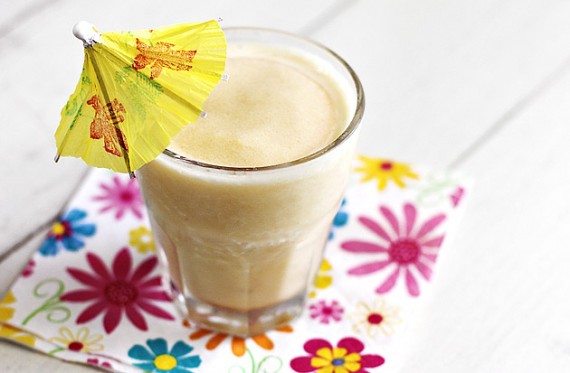 Piña coladas are not cool.

Mainly, I blame “The Piña Colada Song,” but there’s also the evolution of the drink. If you traveled back in time and ordered one in the 1950s (right after you bought gold bars and invented the Internet and Spanx), the bartender would serve you a rum-and-pineapple cocktail (piña colada literally means “strained pineapple”). Clean, fruity and refreshing.

If you ordered one today, the mixologist would laugh you right out the door of his faux speakeasy.

Piña coladas have lost the sexy.

They’ve become these bloated, fatty, cloying coconut abominations we associate with places like Applebee’s and the deck of a Carnival cruise ship.

It’s time to take them back.

This recipe for Lighter Piña Coladas (from “Cooking Light”

) blends the best of both worlds. It’s refreshing and heavy on the pineapple, but there’s also plenty of creamy coconut flavor. What makes it “lighter” is that you use coconut-infused evaporated milk instead of the usual cream of coconut.

Just combine two cups of sweetened coconut with a can of evaporated fat-free milk, warm them, and let the mixture steep in the fridge overnight. When you strain out the coconut, you have your coconut-infused milk.

This lightened-up piña colada is dead-sexy and perfect for the summer. A chest-numbingly cold, super-fruity grown-up slush with a serious rum kick.