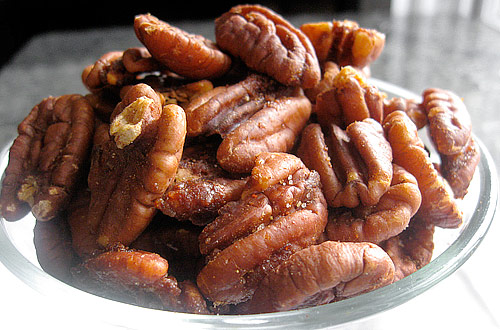 These Spiced Pecans look naked, don’t they? It makes it so much more fun when someone grabs a big handful, because these babies are spicy.

Sure, when you first pop them into your mouth, you only taste the sugar, cinnamon, nutmeg and ginger. But then the heat kicks you right in the back of the throat, like Chuck Norris but with more mercy.

Making spiced nuts is fun, because you can customize the spice mix. This sweet-n-spicy Lee Brothers’ recipe has one ingredient you don’t usually see in spiced nuts: cumin. But if you don’t like cumin, or if you want to dial down the spice in general, substitute the cumin and cayenne with an equal amount of a spice you like. Or take out the savory spices and replace them with more sugar. Or send the sweeter spices back to the rack and replace them with Cajun spice mix. Aiyeeee!

The spices are most intense the first day, so if you don’t want to cough involuntarily during snacking, make these pecans a day in advance. Or, if you’re feeling adventurous, use the pre-roasted spicy pecans to take your caramel corn to the next level. Jacked-up cracker jack? Oh, yesss.