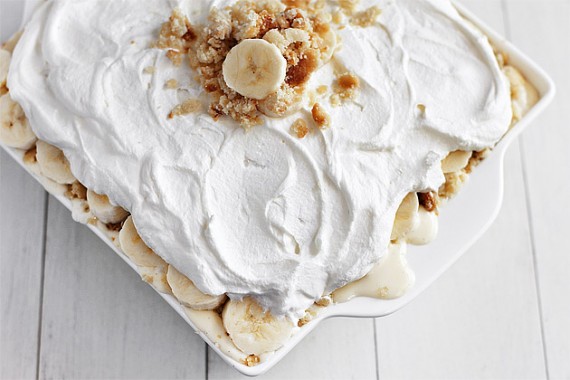 You can’t do summer in the South without banana pudding. It’s a must, like ripe peaches, seersucker, firework stands and Chigarid. That’s mostly because banana pudding is quick and cheap – especially the versions that use Jell-O pudding and Cool Whip – and it makes people happy.

is something completely different: layers of homemade vanilla cream pudding, crumbled shortbread cookies and fresh banana slices, all topped with a cloud of sweetened whipped cream.

The real stars are the buttery shortbread cookies. You know how the Nilla Wafers eventually go mushy in most banana puddings? These cookies have a sandy texture that stays crunchy, and they provide a constellation of salty bits in a sky full of sweetness.

The recipe isn’t hard, but it takes time, so tackle it some morning when you feel like spending a few hours in the kitchen. You’ll need that long anyway to figure out what to do with four quarts of banana pudding.

We took it on the road. Code name: Nanageddon.

Jeff delivered a few quarts of banana pudding to his co-workers, while I took the rest up 65 North with Henry the Wonderdog riding shotgun. Our last stop was a gas station, where my sister Jennifer and I met to trade a few containers of pudding for a bucket of wild blackberries. Then Henry and I took the long way home.

No need to rush. We were out of pudding.

Storage: These bars will keep for up to 5 days stored in an airtight container at room temperature.