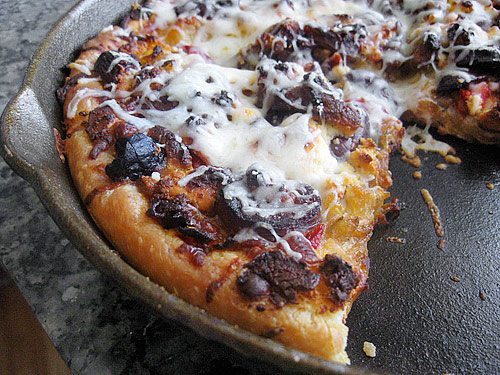 When I go to Goodwill, I find Huxtable sweaters, used crutches and moldy copies of the Encyclopedia Britannica. When Karen Beth goes to Goodwill, she finds immaculate vintage dresses, cool/kitschy artwork and the original documents of the First Continental Congress. She’s got mad thrifting mojo. A few months ago, she found me a copy of Peter Mayle’s “A Year in Provence.”

The book recounts the “charms and frustrations” Peter and his wife, Jennie, experienced as they made the leap from British tourists to residents of Provence. If you’ve ever vacationed in another place and seriously considered staying, this is a book for you.

So, when Mary of The Food Librarian chose “anything literary” as the theme for this month’s You Want Pies With That? challenge, I decided to create “A Year in Provence” Deep-Dish Pizza Pie. A rustic pizza featuring some of the flavors of Provence – olive oil, caramelized onions flavored with herbes de Provence (typically basil, bay leaf, lavender, marjoram, rosemary and thyme), roasted red bell pepper, olives, sausage and goat cheese – baked in a cast-iron skillet for a nice crisp crust.

Now that I’ve seen how easy it is to make and bake pizza in a cast-iron skillet, I think our Friday night pizza deliveries are over. Most of the toppings I used were remnants from other meals, making this one seriously cheap pizza. Thanks for the inspiration, Karen Beth and everyone with You Want Pies With That? A Huxtable sweater to you all.

P.S. Mary is giving extra points to anyone who’s visited the library in the past year. My mom’s a librarian, and I’m cheap, so I’ve spent a lot of time in libraries. In fact, I was conceived on a set of card catalogs. Beat that, ladies.