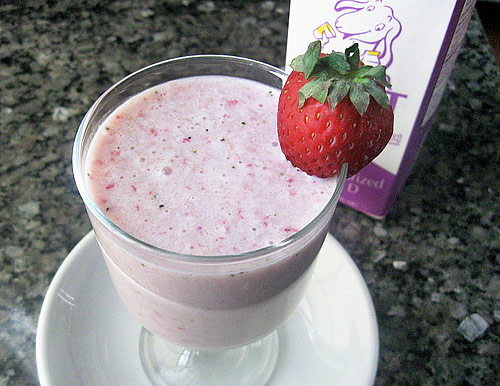 I never gave it much thought until I saw Dr. Oz talking about the “Blue Zones” – four global hot spots where many people don’t just live to be 100, they live to be 100 in good physical and mental health. They’re worki

In one of these hot spots, Sardinia, people drink a lot of goat’s milk, which researchers believe could protect against Alzheimer’s and heart disease. So, when Dana, the chef/recipe writer/blogger/cookbook author/food consultant behind Dana McCauley’s food blog, suggested that we try goat’s milk together, I was game. (Check out her blog to read about how she enjoyed our “mutual virgin goat milk experience.”) I grabbed a carton of Meyenberg® Fresh Whole Goat Milk and put it to the test, tasting it straight and using it to make a smoothie and ice cream.

Straight from the carton, goat’s milk doesn’t look much different from cow’s milk, but the flavor can differ from brand to brand. Some brands are sweeter, some saltier. The brand I tried, Meyenberg®, has a really fresh, bright flavor, and a slight aftertaste that reminds me of goat cheese. It’s not bad, just different. That’s why I don’t recommend haphazardly replacing cow’s milk with goat’s milk in any recipe. Would I use it to make a fruit smoothie? Yes. A not-too-sweet ice cream? Yes. But I’ve read several comments on other sites written by people who’ve had serious trouble using goat’s milk in puddings, so tread lightly there.

OK, so why give goat’s milk a chance?

Goat’s milk is not going to replace cow’s milk in the U.S., but its health benefits should encourage more people to give it a try – especially those who are lactose-intolerant or interested in protecting themselves against Alzheimer’s and heart disease.

Have you tried goat’s milk? If so, what did you think? If not, what’s holding you back, you big, goat-hatin’ wuss?

Combine all of the ingredients in a blender. Blend until smooth.

28 thoughts on “Strawberry and Banana Smoothie”