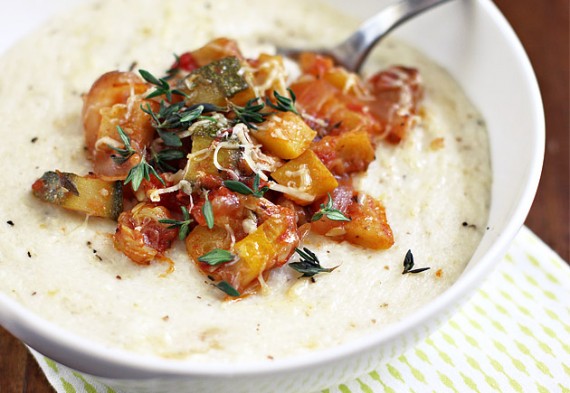 Last week, Daddy gave me two sacks of eggplant, zucchini and squash from the garden, so when my sister, Jennifer, told me she’d found an easy recipe for ratatouille, I was all over it. Don’t be surprised if you find yourself leaned over the baking dish with a fork. I did.– Rebecca

Thank goodness, my kids are willing to try new foods. They don’t run to the toilet to mock throwing up, the way I did over crab salad when I was seven. If they don’t like something, they’re pretty polite about saying, “I don’t care too much for this” and going on with their lives.

That said, I wasn’t sure how they’d react to ratatouille.

Awesome movie, but for dinner? It’s French. There are a lot of vegetables involved. We’re talking tomatoes, eggplant, zucchini and onion. And all of the vegetables are touching each other. But I needed a way to cook up a massive amount of veggies in one blow – with the garden in full swing, we have more vegetables than space to store them – so at lunch, I started mentally preparing the kids.

“Guys, tonight we are going to have an experience,” I said. “Not only are we going to watch the movie ‘Ratatouille,’

The level of intrigue was palpable.

They planned out the floor picnic while I started cooking.

I’d never made ratatouille, so I started to think I’d lost my mind when every recipe I found called for preparing each veggie separately and then combining them – something that would take me at least a week. Then I found this recipe for Roasted Ratatouille in “The America’s Test Kitchen Family Cookbook.” Instead of cooking each veggie separately, you dice them and roast them together, so they brown in the liquid from the tomatoes, as well as olive oil and thyme.

First, the smell is beyond wonderful. It’s “should be a Yankee Candle” awesome.

Second, the ratatouille is really pretty! I used purple Oriental eggplant, bright green zucchini and some deep-yellow Golden Egg zucchini, and those colors swimming with the bright red tomatoes just made for a pretty dinner.

And, lastly, it tastes good, especially with crusty bread.

Ratatouille is usually served as a side, but you can easily make it a main dish by serving it over pasta, rice or cheese grits. You could even use it as a filling for omelets.

We finished off the leftovers standing in the kitchen, using the bread to mop up the last of the ratatouille goodness. While it will probably not go down in history as their favorite dinner, I was incredibly proud of everyone for expanding their culinary vocabularies.

Now, “dinner and a movie” has a whole new meaning at our house. Next, I’m thinking frog legs and gumbo served during “The Princess and the Frog”

or maybe blood pudding and a full Irish breakfast for “Babe.”

Maybe we should keep that one meatless.