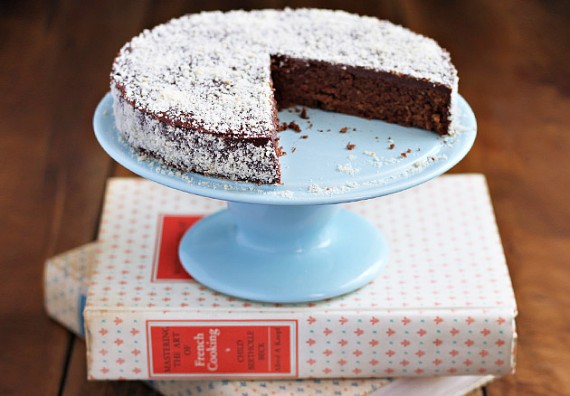 Last week, everyone was writing about Julia Child’s 100th birthday, and it got me thinking that it might be fun to find an old episode of “The French Chef” and cook along. So, I put on my apron, gathered my ingredients, and got ready to bake a Queen of Sheba Cake with Julia.

A rich chocolate and almond cake named for a really rich queen.

The biblical Queen of Sheba didn’t leave the house without a few tons of gold, jewels and exotic spices. I’m usually good with my driver’s license, a debit card and some lip balm.

Anyway, once I knew a little about the cake, I was ready to press “play,” and there was Julia, standing tall, looking so much younger than I’d ever seen her. You could hear the exclamation marks in her voice as she said, “Let’s go into the kitchen! We’re going to make the best chocolate cake you ever put in your mouth!”

From there, Julia was all business. She wasn’t telling stories or offering up a bunch of instantly forgettable trivia on the history of almonds. She was teaching me how to make this cake. It was awesome. I’ve always been nervous about folding in egg white without deflating them (it’s one of my last baking hang-ups), but her tutorial was the best I’ve ever seen. Patient and sure. When my cake came out of the oven, it’s was one-and-a-half inches tall, just like she said it would be.

“It certainly would do wonders for a committee meeting,” she said.

I thought that cooking with Julia would be a one-time thing, but it’s nice to have her in the kitchen with me. Even if I always do the dishes.

P.S. If you’d like to bake this cake with Julia, you can find “The French Chef: Queen Of Sheba Cake”

P.P.S. A few of you have asked me about the cake stand in the photo. It’s Nigella Lawson’s Living Kitchen Cake Stand

This chocolate cake is meant to be under-baked, so the center stays creamy. It is covered with chocolate-butter icing and decorated with almonds.

Slightly adapted from “Mastering the Art of French Cooking”

For an 8-inch cake