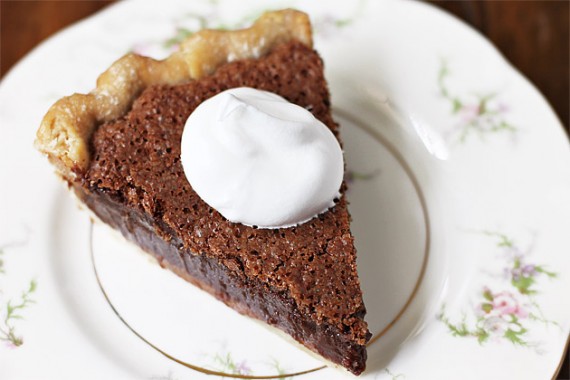 School’s in, which means I can finally rope my sister, Jennifer, into sharing more recipes. Confetti! Fireworks!–Rebecca

Early in our married life, Husband asked if I could make a fudge pie like his Nana Frances’s. Like an idiot, I said, “Sure, where’s the recipe?”

He said, “Well, it cracks on top, but it’s creamy and thick in the middle. Like a brownie, but gooier. In a crust.”

Now, let me say, I’ve had many fudge pies. My momma makes a great one, and they are a staple at any Southern Baptist function. But this was a specific pie. Just like I’d know my Mommaw’s biscuits at 100 paces, Husband knew this pie.

I needed more than a description. I needed that recipe.

Luckily, my mother-in-law took mercy on my clueless self and found it. And so began my trials and tribulations with the “Easiest Pie Ever.”

Pies One and Two taught me that a “small can of evaporated milk” means the 5-ounce, not the 12. They were both garbaged.

Pie Number Three reminded me that there is a difference in a quarter-cup of butter and one-quarter of a stick. You wouldn’t think two tablespoons could make such a huge difference, but they do. Absolutely.

Pie Number Four showed me that small children should not have spray cleaner near a pie. That one was over before it began.

So, Pie Number Five. For this one, I combined all my knowledge and finally, finally, Husband bit into it and said, “You did it! This is the one!”

And he was right.

As it cooled, the top formed and sugary crust and started to crack, just like Nana Frances’, but inside, it was rich and creamy, like an undercooked brownie. Everyone had a piece and declared it their “very favorite ever.”

Now, I’m saving it here, so when my great-grandchildren want to know about Nana Jenn’s pie, those poor wretches know what to do.