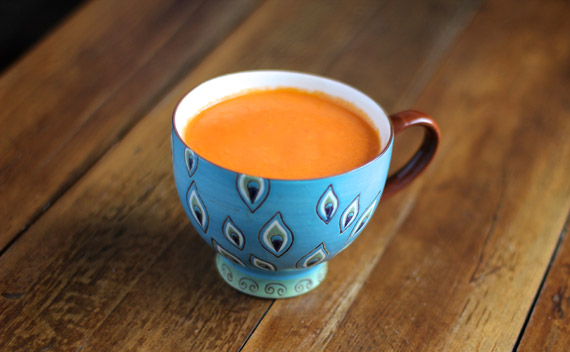 A few years ago, I went to a party thrown by the Kendall-Jackson Wine Estate, and one of the best, most unforgettable, things there was the tomato soup. They were serving it in shot glasses, and by the time I made my way over there, a crowd of people had gathered to down shots and guess the secret ingredient.

The soup was creamy and smoky. Like, bacon-smoky. Had to be bacon, right? I thought the vegetables had been sautéed in bacon grease, for this is the way of my people.

Nope, the soup was completely vegetarian.

They’d smoked the onions and fennel.

I didn’t think I’d ever be able to pull off this soup at home, but then Jeff got a stovetop smoker for Christmas, and it was ON. I smoked the fennel and onion inside in about 10 minutes, tossed them in  big pot with a few tablespoons of butter and a diced carrot, and let them sweat until the veggies were soft.

Then it was time to add the tomatoes.

At Kendall-Jackson, they made the soup with five pounds of peak-season California heirloom tomatoes, which I do not have, so I weighed out five pounds of whole peeled canned tomatoes. Not the same, but it was the best I could do, and I’d still do body shots of it off a hooker’s back.

The finishing touch is a full cup-and-a-half of cream, which works out to three tablespoons per serving. Feel free to dial that back, as you wish.

If you don’t have access to a stovetop or outdoor smoker, you can still make a version of this soup by roasting the fennel and onion. Just slice the veggies into chunks, toss them with a little salt and olive oil, and roast them on a baking sheet for about 30 minutes at 400 degrees F. Your soup will be sweeter but still delicious.