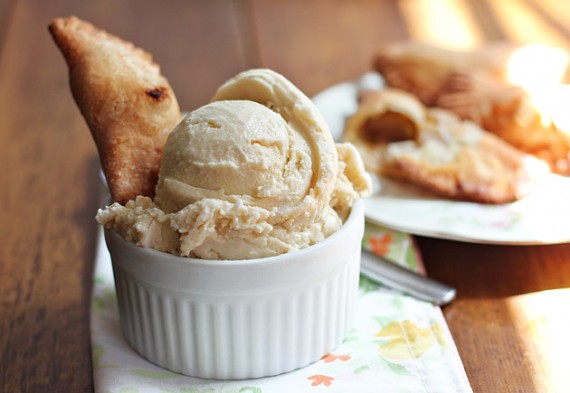 Yesterday, after I shared the maple gelato on Facebook, Lauren wrote about tasting Maple Blondie ice cream straight from the mothership, the Ben & Jerry’s factory.

I’ve never been so jealous of anyone else’s tongue in my life.

She suggested finding a “companion” for my gelato, and that got me thinking about the Bourbon Apple Fried Pies I bookmarked in “The Blackberry Farm Cookbook”

a few months ago, when I was daydreaming about how nice it’d be when it was cool enough to stand over a big skillet full of chopped apples, butter, brown sugar and cinnamon and just breathe it all in. Without dehydrating or passing out.

This is the kind of recipe you can get lost in, in the very best way. Chopping, stirring, rolling and crimping. Baby steps followed by baby steps, all requiring your undivided attention.

My best advice? Don’t fight it.

Pick a quiet morning or afternoon, and give yourself over to the pie-making. Clear off every surface in your kitchen (you’ll need them), locate a 4-inch round cutter (I wound up using a big drinking glass), and play some songs you couldn’t keep yourself from singing if your life depended on it.

I sang along to Ray Charles’ “(Night Time Is) The Right Time” at least three times in a row. It’s a wonder Jeff is still here.

Anyway, every single step (including those five hours of freezer time) is worth the moment when you finally get to bite into one of these crispy, deep-fried pastries and all of that bourbon-apple filling comes tumbling out.

If you’re feeling fancy, dust them with powdered sugar. Or cinnamon-sugar. Or, serve them with a little maple gelato to get that hot-and-cold thing going.

You will probably end up with extra apple filling, but that’s a good problem to have, because it’s delicious on its own or spooned on top of ice cream or waffles.