This post is brought to you by the Maine Office of Tourism and the Schooner J. & E. Riggin, who sponsored my trip to Greater Portland and Mid-Coast Maine. If you want to punch me in the face right now, I completely understand.

Last August, Sharon Kitchens, a beekeeping dynamo who runs her own backyard farm in Maine, rounded up Joy Wilson, Jen Yu and me for a food bloggers’ tour of Greater Portland and Mid-Coast Maine.

I’d never been to Maine, so my impression of the state was largely informed by the L.L.Bean catalog and the works of Stephen King. I had no idea it would be so bright and unruly and beautiful. Pure white light reflecting on the water. Miles of pines and thick patches of sunflowers. Lighthouses and wooden schooners. A cable-knit sweater that drove the spike of lust right into my heart.

Seriously, it looked so cozy and lush. Like a hug on a hanger.

We toured farms and bakeries, talked to chefs and seafood industry experts, and I had some of the best meals of my life. (Thanks, Sharon!) So, if someone asks you to come to Maine, say yes, kiss them on the mouth, and dig into some of these delicious things: 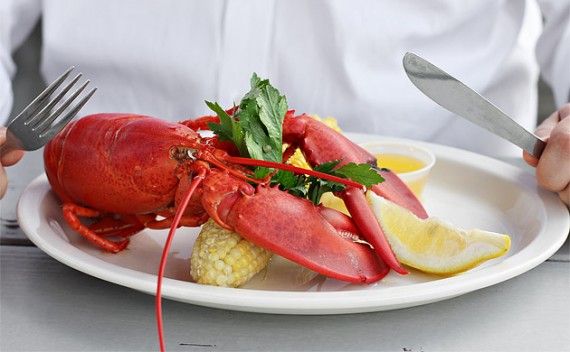 As soon as Jeff and I checked into our hotel, we dropped our bags and made a run to Portland Lobster Co. to try their lobster rolls, which come with big plump pieces of lobster brushed with butter. Grab a seat on the dock, where you can watch the boats and listen to live music and maybe never leave.

Or, for the Full Lobster Experience, treat yo-self with a steamed lobster dinner, like the one Jeff ordered (and I scavenged) at The Slipway. A huge steamed lobster, corn-on-the-cob, a lemon wedge and a jewel-toned cup of clarified butter. Add a few bottles of Allagash White, and the courage to wear a bib in public, and you’ve got a perfect summer afternoon.

2. Anything at Fore Street. Absolutely anything.

Fore Street has this rustic glow inside that works magic. You walk in, and suddenly everyone looks better, laughs harder and forgets that anyone else is there. And the food is incredible. Locally-sourced and simply (but extremely well) prepared. Garlicky wood-oven roasted mussels. Atlantic hake filet with chive butter sauce. Grilled marinated hanger steak.

I still think about the last few bites of dark chocolate torte that I had to leave on my plate. With the sound of “Taps” playing softly in the background.

P.S. You KNOW the food is good when a food blogger forgets to take pictures of it. Make your reservation at Fore Street ASAP.

(Interested in those mussels? Joy posted the recipe at Joy the Baker.) 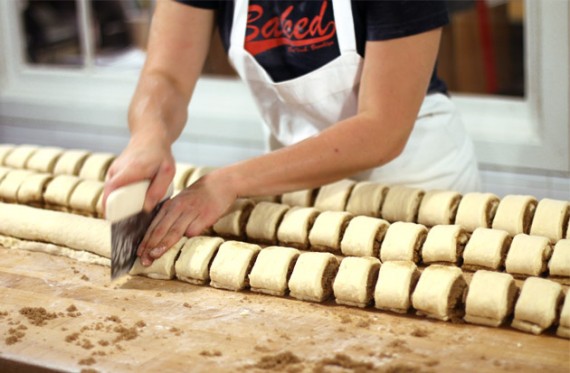 Take your place in line. Gawk at the croissants, scones, baguettes and chocolate corks. But order the morning bun. It’s a sticky-gooey cinnamon roll made with croissant dough. The buns are baked in a muffin tin, so they pop out looking like cinnamon-spiked sombreros. The very best kind.

(Luckily, you don’t have to go to Portland to taste one of these morning buns. The bakery just released “Standard Baking Co. Pastries,”

and that recipe is in there. What?! YES!) 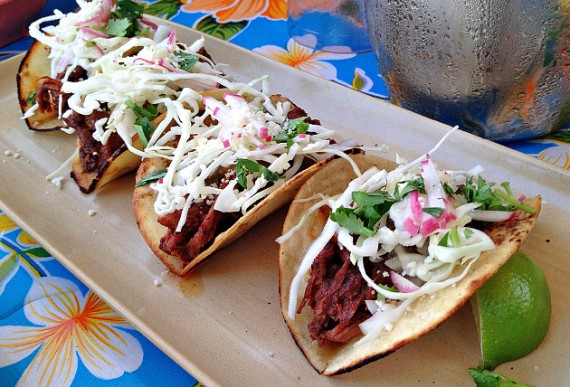 You weren’t expecting awesome Mexican food in Maine? Neither was I, but eat here once, and you will pledge eternal love.

If the weather’s nice, grab a table outside, and order your tacos with a side of their killer Mexico City-style corn-on-the-cob basted with chipotle mayonnaise and a big Margarita De La Casa. But save room for dessert! You don’t want to miss their coconut cupcake. Or the churros with chocolate. Or the Mexican chocolate pudding.

(Wanna make that corn at home? Jen posted the recipe at use real butter.)

5.  Anything at The Well at Jordan’s Farm.

Did you think gazebos were pointless? Me, too!

But imagine having dinner outdoors, seated inside a one-table gazebo, right in the middle of the farm where many of the ingredients in your meal have just been picked.

It’s heaven, and I could have spent the rest of the night there stuffing my face with this heirloom tomato and bacon lardon salad.

P.S. Don’t forget to look for the donation bucket in the flower garden, and pick yourself a bouquet!

Let’s take one of Maine’s most beloved crops, and drink it, shall we?

This blueberry honey wine tastes a lot like a rosé, crisp and fruity. However, if blueberry’s not your jam, stop by Maine Mead Works and ask for a complimentary tasting. You might be more of an Apple Cyser person. Or Dry Hopped. Or a complicated Lavender. 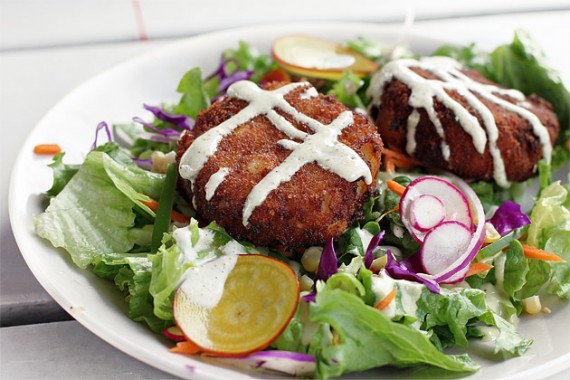 7. Fish Cakes with Lemon-Caper Aoli at The Slipway.

I grew up with crab and salmon cakes, but in Maine, fish cakes are usually made with cod or haddock, so they have a milder flavor. Some people even eat them for breakfast. With baked beans.

But for our purposes, these fish cakes at The Slipway were just the thing for lunch – hot and crisp, dressed with a little lemon-caper aoli and perched on a bed of mixed greens.

Can’t wait to try making them at home. 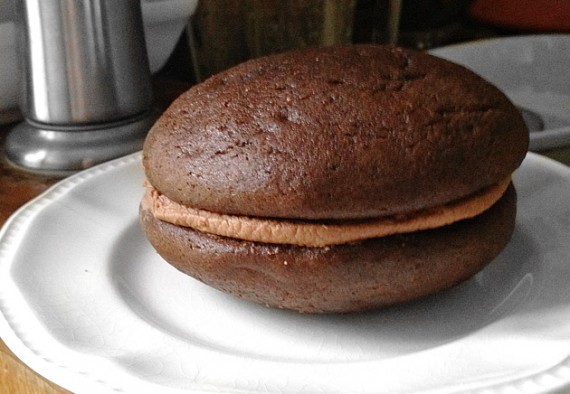 Remember the whoopie pie craze of 2009? I avoided them like the plague then, but once I went to Maine, there was no escaping those soft, cakey-cookie sandwiches. They were everywhere! In bakery windows. Piled next to cash registers. Hanging from trees. I finally had to relent after Jeff bought this one, which was as big as a cheeseburger, and offered me a slice.

Holy goodness. Now, I get it. Instead of going face-first into sometimes overpowering frosting (I’m looking at you, cupcake), the cake takes center stage, and the frosting brings a second wave of flavor.

We were only in Maine for a week and barely scratched the surface of deliciousness. I’ve already scouted out Duckfat sandwich shop, Otto Pizza and Two Fat Cats Bakery for the next time. And Acadia National Park! I’ve really got to see that.

Until then, you princes of Maine, you kings of New England.

Fax me a lobster.