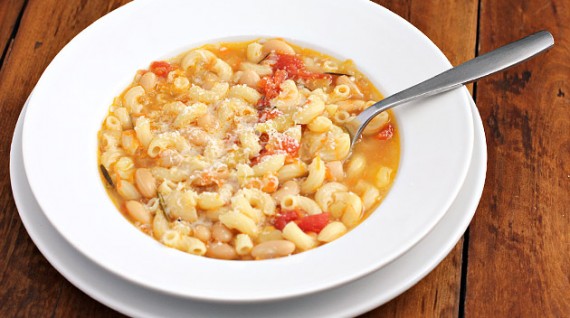 OK, this is the last pasta dish for a while, I promise. Especially since I’m neither an Italian grandmother nor do I have the unstoppable metabolism of a 15-year-old boy. But last Saturday, I had to choose between going to the grocery while it was snowing in Nashville and making due with what was in the pantry. And since I do not want to make “News of the Weird” for being trampled to death because I veered too close to the chili beans or toilet paper, I went with the pantry and Lidia Bastianich’s Pasta e Fagioli (Pasta and Beans).

The ingredients are things you’ve probably had on-hand all winter: beans, pasta, canned tomatoes, potatoes, bacon, onion, carrots, Parmesan and olive oil. You could just throw them into a pot and simmer them, but Bastianich coaxes as much flavor as possible from each ingredient. Take the bacon: Instead of frying it and adding it to the pot, she teaches you to blend the raw bacon in a food processor with the garlic, add that garlicky bacon paste to a hot skillet and use it for softening the onion, carrots and tomatoes. By the time you add those sautéed vegetables to the soup pot, the bacon is ready to disappear into the liquid, infusing it with that salty, smoky flavor that just does things for beans. And life.

About the olive oil and Parmesan … don’t skip those. I know, they seem like finishing touches (a drizzle of this and a sprinkle of that), but they are absolutely essential. Without them, you just have a big pot of pasta, beans and potatoes. Not very exciting. But top each bowl with a thin stream of olive oil (for extra flavor and richness) and a salty sprinkle of Parmesan, and you’ve got a soup that’s 100 percent sexier.

That’s 200 percent sexier than being trampled in the TP aisle.

This soup freezes like a dream, as long as you leave the pasta out. Just make it separately, and add it to the pot when you’re ready to serve the soup.