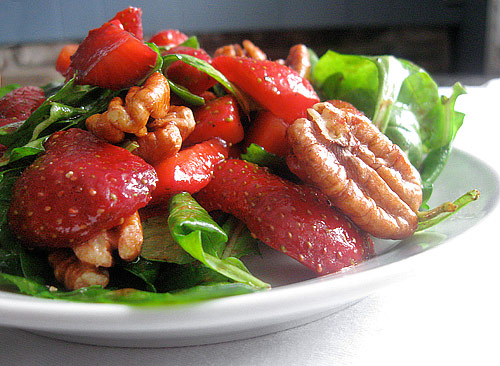 Normally I wouldn’t violate his privacy this way, but Henry the Wonderdog is about four pounds overweight.

I found out last week when I took him to the vet to have his nails trimmed, and the vet’s assistant acted like she couldn’t believe I let his fat ass out in public.

So, she asks me what he eats, and I have to admit I have no idea, because Henry is the Canine Roomba. I used to spend half the day pulling things out of his mouth. Bread ties. Dead leaves. George Washington’s Inaugural Bible. He’s ALWAYS CHEWING SOMETHING, like an old man with a cheek full of tabacky.

Once, I dropped a hot wing, and he swallowed it whole before it hit the floor. Did I panic? Yes. Did he so much as burp? No. So, I don’t get involved unless there’s a possibility he’s chewing a.) glass or b.) a fast-acting poison.

What does this have to do with my Arugula Salad with Strawberries and Pecans?

Ever since I’ve put Henry on a diet, he gives me the hungry eyes and follows me around, hoping I’ll accidentally drop a scrap of chicken or a ribeye or an entire Red Velvet Cake. Yesterday, I dropped a balsamic vinegar-soaked strawberry, and he looked at me like WOMAN! AWWW, HELL NO! Turns out, this lovely combination of strawberries, toasted pecans and peppery arugula tossed with a balsamic vinaigrette is perfect for a light spring lunch AND canine appetite-control. Today, I think I’ll drop a lemon.

Arugula Salad with Strawberries and Pecans

21 thoughts on “Arugula Salad with Strawberries and Pecans”