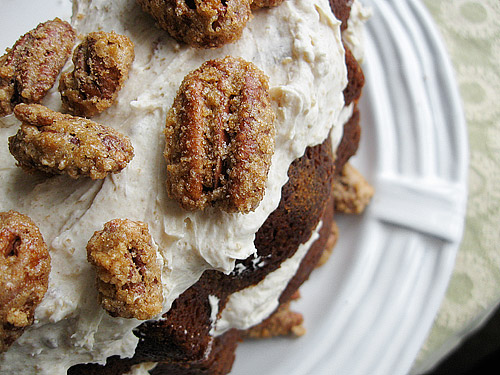 A little while ago, a very short, simple e-mail popped up in my Inbox. It said, “I was wondering if you have a favorite maple syrup and if you’ve ever tasted pure maple syrup from Quebec.” I wrote back that I didn’t, and I hadn’t. I thought the company might send me a sample-size bottle of syrup. Instead, Brien Fine Maple Products sent me a lovely package filled with maple syrup, fine granulated maple sugar, chipped maple sugar, maple butter and soft maple candies. No strings attached. They didn’t ask for a review, or three links or so much as a mention.

So, I took the box of pure Canadian maple goodness to my grandmother’s house, because Mommaw’s the only person I know who eats waffles with butter and syrup for breakfast EVERY SINGLE DAY. Since it was dinnertime, Mom made pancakes, and we all tried the syrup and dipped our spoons into the maple cream, which was almost as thick as peanut butter. Mommaw was beaming. In total maple syrup nirvana. Most syrup is just sticky and sweet, but this maple syrup had personality. The flavors were complex and depthy. It had a past. If regular syrup were Miley Cyrus, maple syrup would be Meryl Streep.

As for the rest of the syrup and the two types of maple sugar, I thought they’d be perfect for this Maple Pound Cake with Pecan Crunch Buttercream and Candied Pecans that I’ve been lusting after from Warren Brown’s “CakeLove.”

The cake is dense, moist and absolutely saturated with maple flavor. You could bake it, dust it with confectioner’s sugar and live a rich and very fulfilled life. But, if you want to really take this cake to the next level (or dress it up for company), split the cake and fill it with pecan crunch buttercream. Then, use your remaining buttercream to top the cake, and decorate it with homemade candied pecans.

You know those times when you get lost in the Zen of Baking, when hours slip by, and you’re completely caught up in the measuring and mixing and the details of the process? That’s what making this cake was like for me. A few rainy-day hours getting lost in the process and the intoxicating scent of pure maple syrup.

Merci beaucoup to Brien Fine Maple Products. You have a convert.

STORING: Store under a cake dome at room temperature, or wrapped in plastic in the fridge for up to 1 week. To store longer, label, date, and store the plastic-wrapped cake in the freezer for up to 1 month. 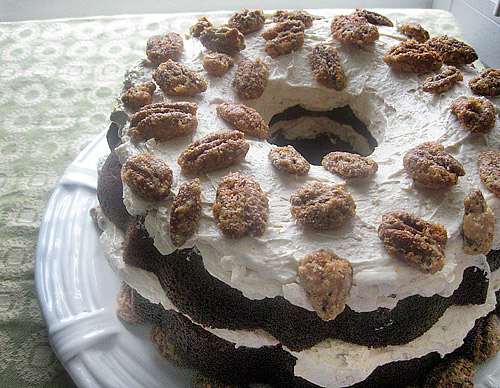