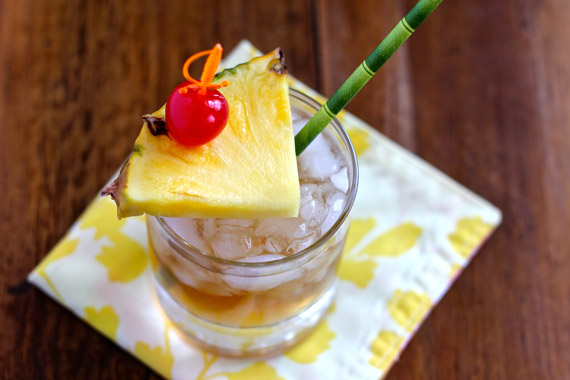 Welcome to Mad Men Week! I’m celebrating the April 7 return of Mad Men with recipes inspired by the show and its (rumored) season six premiere setting: Hawaii. You can’t have a Mad Men party without cocktails, so this year, we’re rocking the ultimate tiki cocktail, the Mai Tai.

Don’t you love it when you find out you’ve been doing something the wrong way your whole life?

I’ve always just put my cocktail ingredients into the shaker, shaken them (with one hand) for a few seconds and poured.

According to  “Trader Vic’s Tiki Party!,”

you’re supposed to hold the shaker at both ends, lift it up to shoulder height, and shake it for about 15 seconds in a figure-eight motion horizontally. Hard and fast. When it’s almost too cold to hang onto, THEN you’re done.

What difference could it make?

I made this Mai Tai both ways. My first drink, just shaken up-and-down for a few seconds, was way too bright and sour. The lime totally dominated. But the second, shaken Trader Vic’s way, was much smoother, with the bite coming at the end of the drink instead of right up front. This Mai Tai tasted like a brand new thing, instead of just the sum of its parts.

Well played, Vic. Now to find a bra that’s up for the challenge.

P.S. Trader Vic (Victor Bergeron) named this drink the “Mai Tai” after he made one and a friend proclaimed it was “mai tai roa ae.” Tahitian for “out of this world.”

Note: To make simple syrup, combine 1 pound sugar (about 2 1/2 cups) with 1 cup water in a heavy saucepan over medium-high heat. Bring to a boil and cook until the sugar is dissolved, about 2 minutes. Cool, and pour into a jar with a tight-fitting lid. Will keep for several months in the fridge.