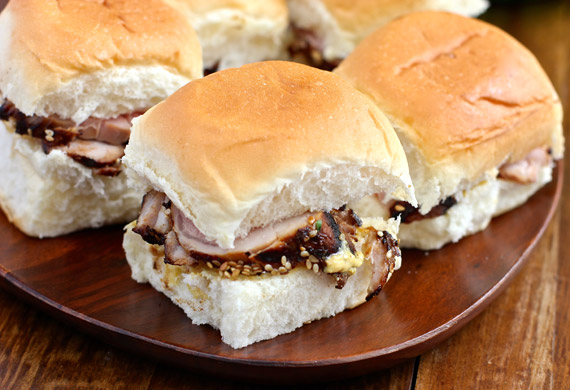 Due to my seafood allergy and our goal to cut back on beef, we have pork (or chicken) approximately 9 million times a week. It can get a little boring, which is why I jump up and down and high-five myself every time I find a new pork recipe that we both really love.

“Char Siu” means “fork roast,” since the Chinese have traditionally barbecued the pork by skewering it onto long forks and roasting it over a fire. In this case, the pork is marinated first in a mixture of soy sauce, hoisin sauce, sugar and ketchup, so the outside gets nice and sweet while the inside stays tender.

Don’t miss the finishing touch: those toasted sesame seeds. It’s a simple step that’d be tempting to just chuck, but that extra layer of crunch and salty, toasted flavor balances the sweetness of the pork and takes these slices to the next level.

You can eat the pork as-is, but I decided to make sliders, mainly so I could break out the tater tots. Just pick up a pack of Hawaiian dinner rolls, split them, slather on the Chinese hot mustard (and/or mango chutney), and dig in.

And don’t forget to high-five yourself.

Note: Toast sesame seeds in a dry frying pan over medium-high heat for 2 to 3 minutes, shaking the pan until the seeds are golden.

To Roast the Pork in the Oven: Preheat oven to 450 degrees F. Place an aluminum foil-lined pan in the oven. Set the pork directly on the rack over the pan (to catch the drippings). Roast for 25 to 30 minutes, turning once during cooking. (The meat should register at least 150 degrees F on an instant-read thermometer.) Let the meat rest for 10 minutes, and sprinkle it with the sesame seeds.