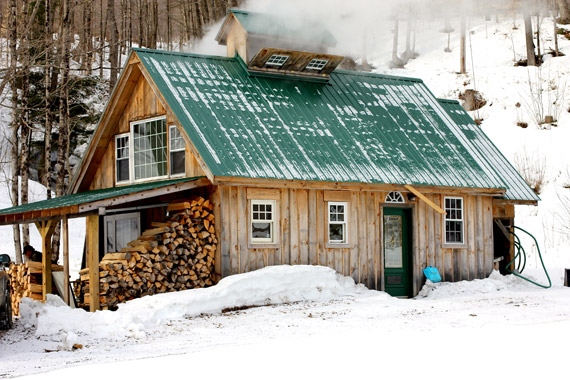 I haven’t always been a huge maple syrup fan. Last time my nephews spent the night, I picked up a squeeze-bottle of table syrup for our Saturday morning waffles and didn’t think twice about it. But, since my trip to Vermont, maple has become way more than just a pancake-soaker to me. Maple is a staple. A sticky, sweet multipurpose elixir that does magical things for salad dressings, breads, marinades, barbecue sauces, desserts, cocktails – it’s even good stirred into coffee.

Maple has soul. You just can’t say that for Mrs. Butterworth’s.

I was expecting to see a huge factory.

Instead, we started the tour at Arnold’s cousin Ted’s sugarhouse, a small wood shack tucked in a crescent of shaggy, silvery maples in Guilford, Vermont. 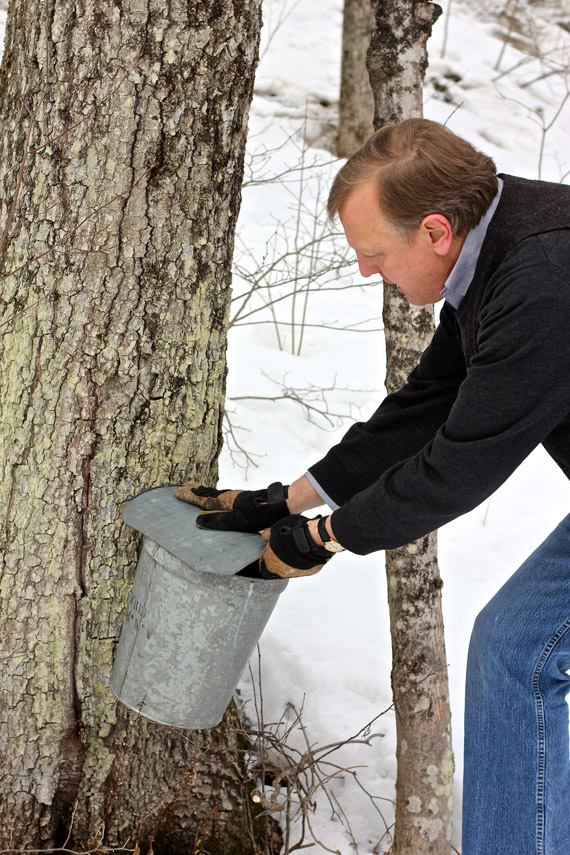 When Arnold was a newborn, his mother took him from the hospital straight to the sugarhouse to visit his dad, and it’s obvious his roots are interwined with the roots of these maples. And the man tap a tree the old-school way like it ain’t no thang. Each of us followed behind him, trudging up the snow-packed tire tracks, to take a turn at tapping.

I don’t think I’ve been that stressed since the SATs.

Actually, the process is relatively easy, especially if you’re not afraid someone might Instagram you falling face-first into a snow bank. Using a hand-turned drill, you drill a hole at an upwards angle, gently hammer a tap into the hole, hang your bucket on the hook below the tap, and guide a lid onto the top of the bucket to keep out the rain and snow.

In Vermont, the sap usually starts to flow in March, after a succession of warm days and freezing nights. The “sugaring off” lasts until the trees start to bud, from four to six weeks later. According to Arnold, they stop collecting sap at this point, because the syrup takes on a “metabolism flavor.” He’s being generous. Others have compared the flavor to “sweaty gym socks.”

However, the galvanized buckets we hung that morning are quickly becoming the kind of romantic relic you might spot during a tourist weekend or in a Nicholas Sparks movie. The larger Coombs Family Farms operation was one of the first to trade its metal taps for plastic health spouts, which don’t collect bacteria. And instead of buckets, they use pressurized blue tubing to suck the sap into holding tanks. It winds through the sugar bush, connecting the maples like long strands of blue spaghetti. The Native Americans who taught the settlers how to harvest maple syrup couldn’t have imagined this, but Arnold explained that the tubing helps farmers collect much more sap while keeping the trees healthy.

Healthy trees are at the heart of Coombs Family Farms.  Other businesses talk sustainability, but Coombs still taps some of the exact same trees Arnold’s great-great grandparents once did – trees that are now around 300 years old. 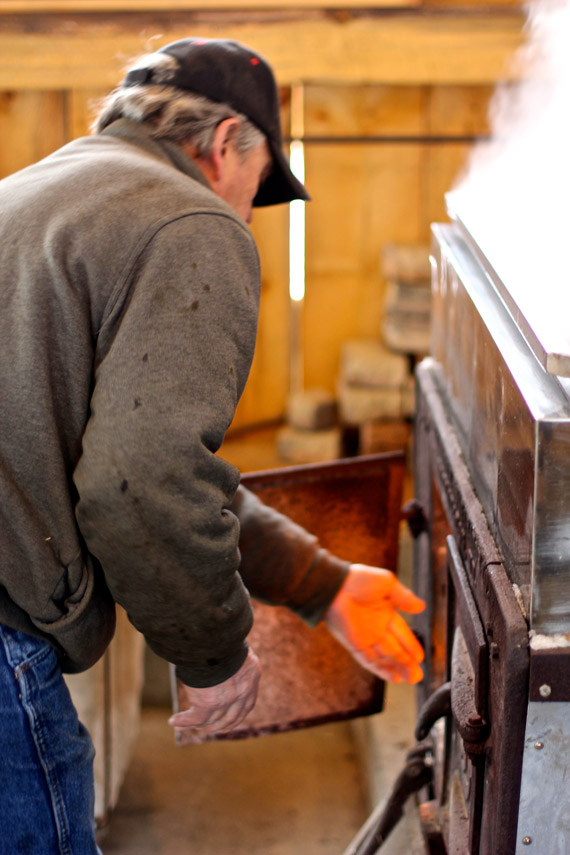 As we ducked inside the sugarhouse, you could feel the warmth of the wood-fired evaporator and smell the clouds of maple-scented steam rising off the boiling sap. That’s where we met Arnold’s cousin Ted, wearing a jacket splattered with sap, feeding wood into the cast-iron stove at the bottom of the evaporator. On top, we could see a wide, shallow metal box half-full of sap boiling over the fire, bubbling and concentrating into syrup.

According to Ted, it takes 40 gallons of sap to make just one gallon of maple syrup. (In comparison, the cheaper table syrups are mostly made with high fructose corn syrup, corn syrup, brown rice syrup, natural and artificial flavorings, artificial colorings and preservatives. No maple.)

However, the business has been able to speed up the process and cut costs by being the first in the maple industry to adopt reverse-osmosis technology, which uses agitation to separate water from the sap. So the resulting sap is already somewhat concentrated and turns into syrup much faster. Arnold said the innovation has helped them reduce their  carbon footprint by 75 percent. 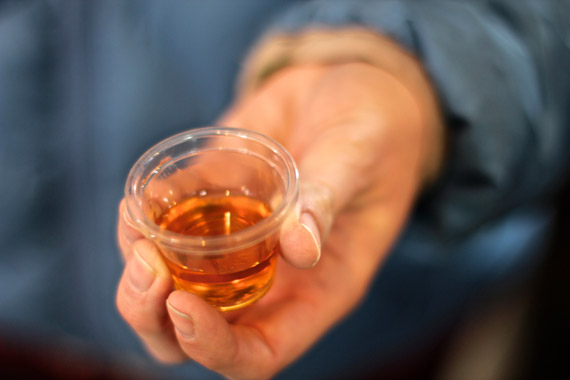 Ted asked, “Would you like to try some?,” and handed me a shot of maple syrup. Instead of taking a sip, I touched my finger to the surface and braced myself as I tasted it. Because I was totally expecting it to be way too sweet. You know, like the red sugar water in hummingbird feeders. Like table syrup.

But, you guys. This was a whole new experience.

After that tiny taste, I immediately took a big sip, and it was like when you have your first glass of really good wine and think, “Ohhhhhh, so THIS is what it’s supposed to taste like.” It was complex. Seductive. Sweet, yes, but smoky, too. Almost like caramel. 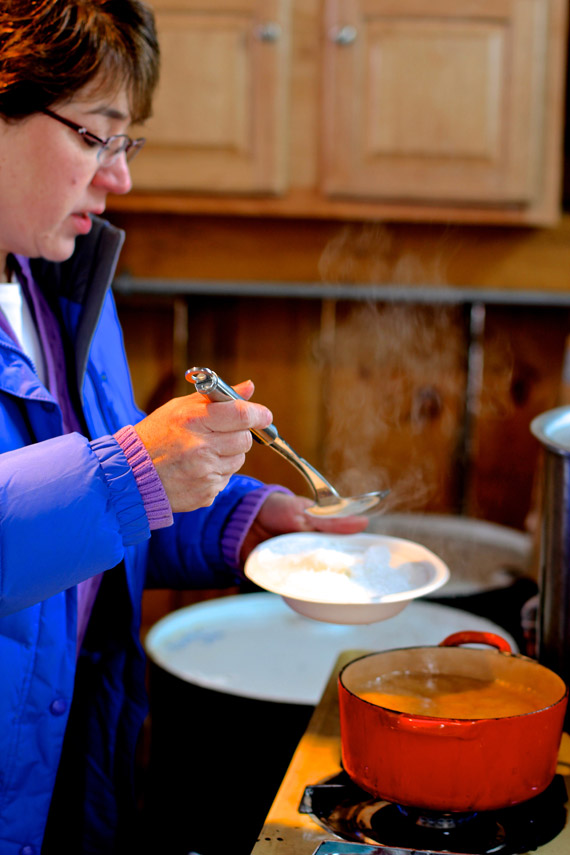 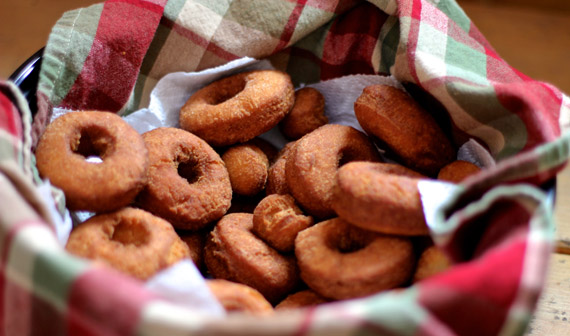 There was a stove in the corner of the sugarhouse, where Cindy Finck had been bringing a pot of maple syrup to the right temperature (about 234 degrees F) to make us a traditional sugaring off treat: Sugar on Snow. We watched as she ladled the syrup onto bowls of fresh snow. Then as the syrup cooled, it formed a soft candy that was a lot like taffy. There were also jars of pickles (to cut the sweet) and baskets of yeast-risen doughnuts. 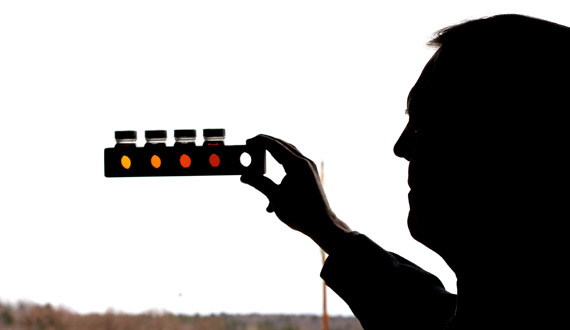 While we were hanging out, Arnold explained the mystery of maple syrup grades.

First off, the grades exist so we can be sure we’re buying real maple syrup. By law, artificial table syrups can’t use “maple” in their names, but sometimes their packaging can be confusing. Especially when it looks like a maple syrup jug. But if a syrup doesn’t have a grade on the front, it’s not maple.

So what about the actual grades? Is “Grade A” syrup the best syrup? No. The actual grades – Grade A light amber, Grade A medium amber, Grade A dark amber, Grade B, and Commercial Grade – refer to the color of the syrup and its flavor. As the sugaring season goes on, the syrup gets darker and darker. The darker the color, the more intense the flavor. It’s not a matter of which one is better but which one YOU prefer – just like whether you go for blondes, brunettes or redheads. White or red wine. Goat cheese or something much, much stinkier.

You get what I’m saying. 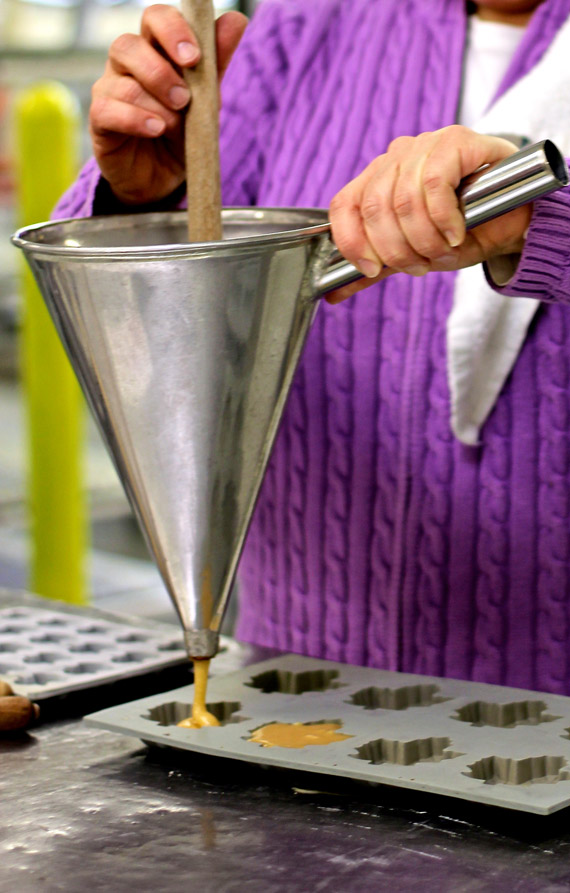 We also got to check out the Coombs Family Farms Maple Candy Kitchen – one of only three in the county – located in Brattleboro, Vermont. They’ve mechanized different steps in the process, but Arnold let us try filling the maple candy molds the old-fashioned way: by using a wooden rod to quickly guide the flowing candy through a funnel into the molds.

It’s not as easy as it sounds.

The women there boil and then cool maple syrup to the right temperatures, mix it until it thickens and turns golden and creamy, and then they release it into the molds. Molds that look like three-dimensional men, women, hearts, shells, snowmen, Santas and maple leaves.

Everything at Coombs Family Farms comes back to the maple. 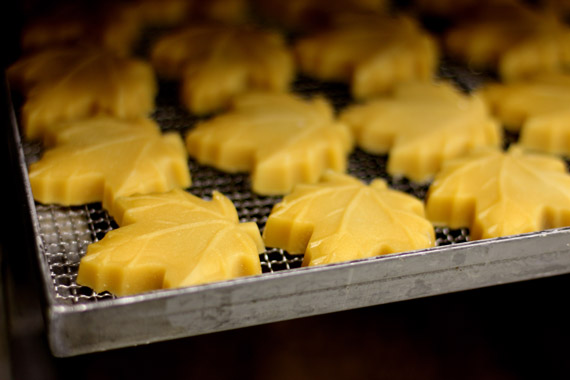 I just want to get back to that sugar shack.

Full Disclosure: My trip to Vermont was sponsored by Coombs Family Farms, which paid for my transportation, lodging and meals. And they shipped me one mighty generous bucket o’ maple swag. However, they did not threaten to boil me in maple syrup if I didn’t write a post. I was under no obligation. I just wanted to write about it. It seemed cooler than making fondue and inviting you to a slideshow.