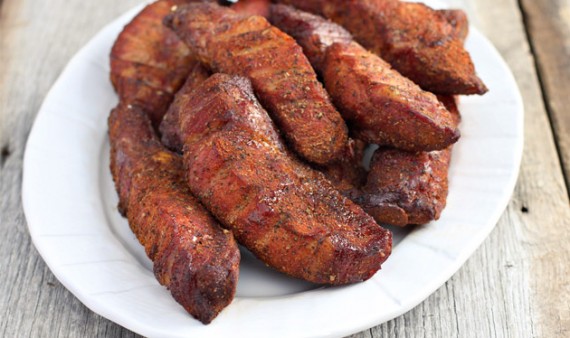 If you’ve never had a grilled, boneless country-style rib, it’s a lot like a French toast stick made out of pork. A completely edible wedge that’s crusty, chewy, sweet and salty.

And they’re both delicious with maple.

If you’ve ever nudged your bacon into a puddle of maple syrup, you know what I’m talking about. Maple and pork BELONG together. It’s a case of opposites attracting. So, it just makes sense that maple also does amazing things for ribs.

These Maple Barbecued Country-Style Ribs are dredged in a homemade sweet-and-savory Maple Barbecue Rub, grilled, and served either dry or slicked with a Maple Chipotle Barbecue Sauce you can simmer on the stove in minutes. (The sauce only gets better with time, so if you’re a planner, get it going the night before your cookout, while you’re dredging the ribs.)

The best thing about eating them is that, every once in a while, you hit a prize bite, where the lean is perfectly balanced with a pocket of grill-smoked fat, and the whole bite melts in your mouth. Way too quickly.

I’ll eat another two ribs just hoping for another one of those prize bites. It’s not exactly a sacrifice.

This rub works on pork, chicken, beef and fish.

Combine all ingredients in a bowl. Mix well. Store in an airtight container.