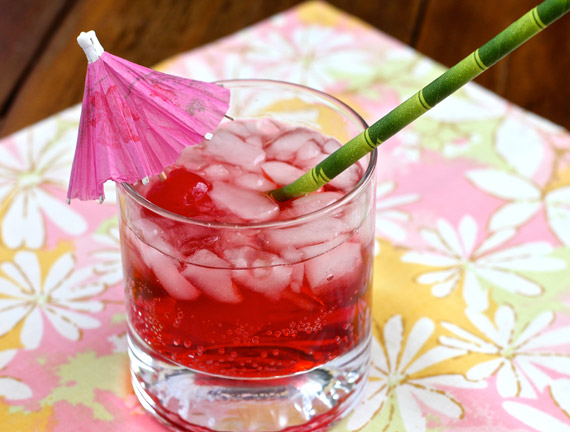 Welcome to Mad Men Week! I’m celebrating the April 7 premiere of Mad Men with recipes inspired by the show and its season premiere setting: Hawaii. Today’s Shirley Temple comes from the episode “At the Codfish Ball,” where Sally Draper (Kiernan Shipka) sips one of these during the awards dinner for her dad, Don Draper (Jon Hamm). Yep, the same party where she catches her step-grand-mére (Julia Ormond) hooking up with Roger Sterling (John Slattery). Seriously, can we get this kid some extra cherries? She’s seen too much.

A few weeks ago, I was at a cocktail party where a 2-year-old was trying to climb his mom like a tree to get to her drink. And I thought, what kind of world do we live in, where a teething toddler can’t even get a whiskey sour to ease his pain?

He couldn’t have cared less about her drink. He was all about the garnish: a bright blue plastic sword piercing a wedge of pineapple and a maraschino cherry. Embarrassing to some adults. Irresistible to kids.

I asked the waitress about bringing him a Shirley Temple with a garnish of his own, and she had no idea what I was talking about. Which is a crime against beverages. Because Shirley Temples are delicious. The drink, which was invented by the Royal Hawaiian Hotel in the 1930s for the real Shirley Temple, is just a mix of ginger ale (or Sprite) and a little Grenadine, but it’s pretty, it looks grown-up, and it takes a cocktail garnish like a champ.

I’ve been drinking one with lunch all week. Yes, with a paper umbrella threaded with maraschino cherries. Why should kids get all the fun?

Let’s bring this one back.