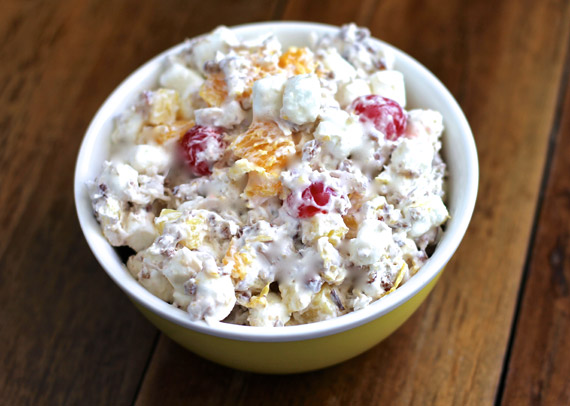 In Greek mythology, “ambrosia” was the food of the gods – something much too good for mere mortal mouths – but unfortunately, no one ever described exactly what it was. Baklava? Fresh doughnuts? Jalapeño poppers?

In the South, Ambrosia means one thing: fruit salad. Specifically, a fruit salad with orange segments and coconut. Something sweet, juicy and cold that you can serve as a side for any meal. Edna Lewis made hers with a little sugar and cream sherry. Some people add more fruit, like chopped pineapple, bananas, strawberries and grapes. Momma’s ambrosia, studded with right red maraschino cherries, has appeared in a small red glass next to each plate for every big family breakfast since Noak parked the ark. It was always a small win if she could get us to eat a few bites of fruit, even glow-in-the-dark fruit, instead of just inhaling smoked sausage and hashbrown casserole.

It’s never really worked for me (sorry, Mom), but I’ve always stuck with the same recipe, because we have a history. I never considered that there could be something I’d like better out there.

I mean, I’m still trying to break up with my car. It’s a 15-year-old Saturn, just the second car I’ve ever owned. The first was a red Pontiac Sunbird that died with a trunk full of stuff I was moving to my first post-college apartment. Every few yards, it would lurch forward, belching dark gray smoke, until it finally rolled to an eternal stop on the side of the road.

The Saturn is different. It needs a thousand-dollar computer. I looked up the Kelley Blue Book Value of the car: $275.

Would you put a thousand-dollar computer into a $275 car?

But when I see it sitting in the driveway, I don’t think about the deafening grunt of the engine, the dings and dents, or the cardboard peeking through the visors. The flurry of dry-rotted ceiling fabric that falls on my head every time I shut my car door. I remember all the living I’ve done since I bought it. The jobs and the moves and the first (and last) dates. I was driving the Saturn the day I passed the “Help Wanted” bakery sign that changed my life, and I was driving it the day Jeff and I decided to get married in Hawaii and picked up a plastic lei to hang on the rearview mirror.

Mostly, I think of the rush I had when I made that last payment. After times when I’d been so broke that I’d loaded up all the canned food in my apartment and traded it back to Walmart for a few dollars, paying off that $116-a-month loan was one of my proudest accomplishments.

I don’t want to leave that girl behind. But I guess I’ve been idling, thinking about my life in reverse while it’s been moving forward.

Anyway, in the spirit of moving on to new things, I decided to try a new recipe for ambrosia. This one has Mom’s oranges, coconut and maraschino cherries, but it’s also chock full of chopped pineapple, toasted pecans and mini marshmallows, coated in a “dressing” of whipped cream and sour cream (to cut the sweet). It is delicious, as a side or dessert. Chunky, crunchy, creamy and chewy. A fireworks-in-the-mouth, where-has-this-been-all-my life experience.

Maybe my next car will be an El Camino.

If you have a moral objection to any of these fruits, feel free to substitute with bananas, strawberries or grapes.