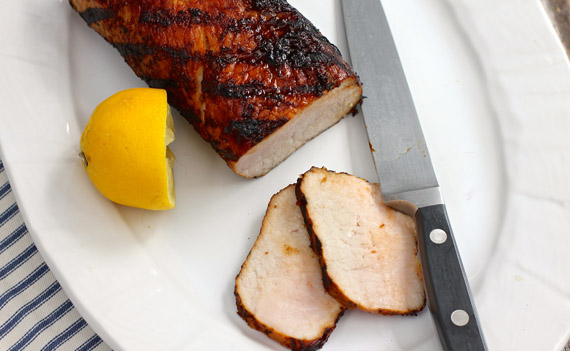 OK, no one plans a cookout around pork tenderloin. We know this. But when Jeff’s in the mood to grill burgers or steaks, I usually pick up a pork tenderloin to marinate and throw on the grill, too. Because once the grill’s going, I like to get as many meals out of that fire as humanly possible. Plus, a day-old burger can’t really compete with the original, but a day-old tenderloin? Still tender. Still juicy. And I get to keep the oven off for one more night. High-fives all around. The other thing I love about pork tenderloin is that you can really change up the flavor with different marinades, so it doesn’t have to taste the same every time. Here are four of my favorite recipes:

1. Grilled Ginger-Honey Pork Tenderloin (shown above). I’ve been known to slice this pork thin and eat it right off the platter. It’s marinated in a light mixture of fresh ginger, honey, lemon juice and soy sauce, so the pork gets sweet and salty and has this really subtle ginger kick.  Delicious with stir-fried vegetables and rice (or noodles). Or just eat it with your fingers. (Recipe at the bottom of this post.) 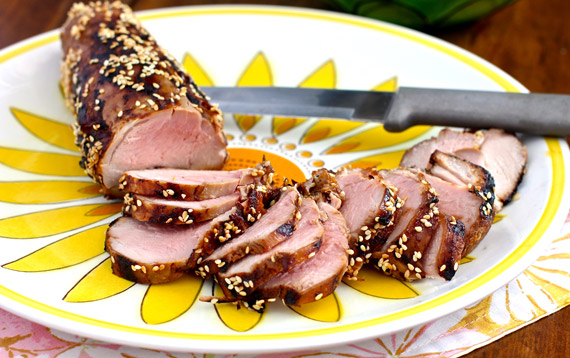 2. Trader Vic’s Char Siu Pork. Feeling a tiki mood coming on? Marinate your tenderloin in soy sauce, hoisin sauce, sugar and ketchup; throw it on the grill; and sprinkle it with toasted sesame seeds. The outside gets nice and sweet while the inside stays tender, and then the seeds give you a whole extra layer of texture and flavor. I like to slice mine and dip it into hot Chinese mustard, because I’m decadent that way. So good with Hawaiian Macaroni Salad. And a Mai Tai. 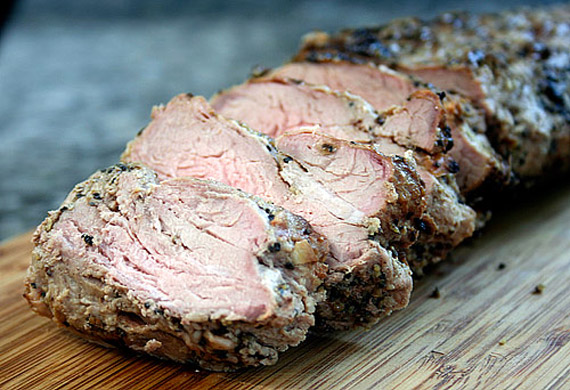 3. Caribbean Pork Tenderloin. This is a summer staple at our house – pork tenderloin marinated in coconut milk, Vidalia onion, ginger, garlic, hot peppers, brown sugar, lime juice and dark rum. You’d think so many strong flavors would overwhelm the pork, but the coconut milk brings everything together and mellows it, so the pork has an “island” flavor you can’t quite put your finger on. The first time we tried it, Jeff and I ate it right off the cutting board. 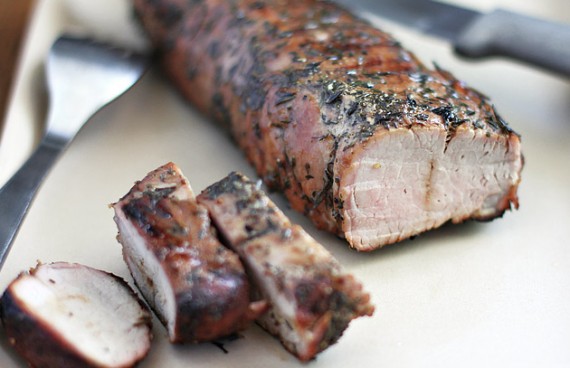 4. Southern Grilled Pork Tenderloin Glazed with Bourbon and Molasses. This is a big-flavor recipe. You marinate the pork in coffee, bourbon, molasses, balsamic vinegar, olive oil and thyme, so that first bite can be a real shock to the taste buds. Intensely sweet and sour and complex. I wrap up the grilled tenderloin once it’s cooled, let the flavors mellow overnight, and then warm it up for dinner the next day. Absolutely mouthwatering. A great recipe for those early days of fall, when it’s still hot as hell but you’re craving autumn. They’ll be here soon enough.

Be sure to grill this one outside, not in an indoor grill pan. The honey in the marinade can stick to a grill pan and burn, causing smoke, smoke alarms and rampant cursing. You have been warned.