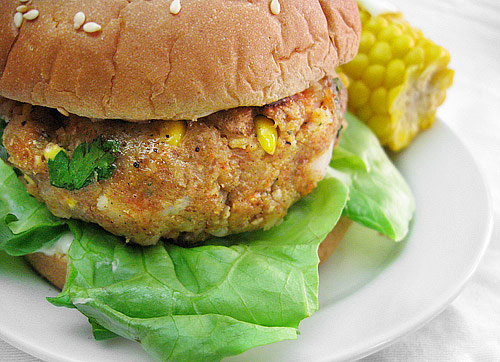 I’ve lived in the South all my life, but I’d never heard of shrimp burgers until I read about them in “The Lee Bros. Southern Cookbook.”

Apparently, they’re a popular menu item in Southern shrimping towns, especially ones in Georgia and the Carolinas. Since I still haven’t been able to talk Jeff into trying shrimp and grits, I thought these shrimp burgers might make a fine gateway drug.

If you’ve ever made crab cakes, the process for shrimp burgers will seem very familiar. However, when you’re making crab cakes, you sauté staples like onions and peppers before combining them with the crab and other ingredients. This shrimp burger recipe calls for the raw scallions, corn kernels, parsley, ginger and lemon zest to be added to the shrimp and refrigerated before frying. When you first bite into the burger, you’ll notice that the flavors are very bright, especially the ginger and lemon zest. They really complement the shrimp and help turn the sandwich into a seafood experience rather than just a burger alternative.

Try these burgers on toasted hamburger buns with a little lettuce and tartar or cocktail sauce. Or, if you’re feeding a crowd, you can make smaller patties and turn these burgers into shrimp sliders served in toasted dinner rolls. As for sides, we kept things simple and ate some of the leftover corn-on-the-cob jazzed up with a squeeze of lime, but the burgers also would go nicely with coleslaw, sweet potato fries, cucumber salad, or sliced tomatoes with salt and pepper and a little balsamic vinegar.

Using a mortar and pestle, pound the peppercorns, celery seeds, bay leaves and salt, in batches if necessary. Place the mixture in a small bowl, and add cayenne.