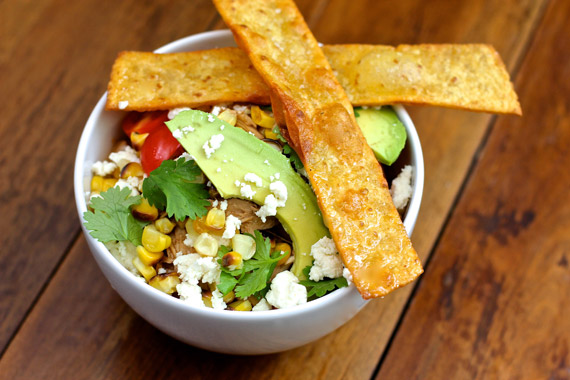 We’ve been doing Taco Tuesday all summer, because it’s a fun way to use up leftovers, and who doesn’t like tacos? They’re delicious.

But even good things need to be switched up once in a while, which is why I made a big batch of Mas Tacos Por Favor’s Tortilla Soup last Tuesday. Mas Tacos is a funky little Mexican joint in East Nashville that’s known for its unique tacos (especially the fried avocado and sweet potato-quinoa), Mexican grilled corn and this soup, which STAYS sold out. Year-round. I’ve never gotten there in time to get a bowl, so when I found the recipe in “Bon Appetit,” I wooo’d like one of those chicks who wear pink cowboy hats to bars.

It made the dog bark.

Anyway, this isn’t some thick, wintry tortilla soup. It’s light and fresh and colorful. A smoky chicken soup topped generously with fried tortilla strips and summery things, like grilled corn, cherry tomato halves, sliced avocado, fresh cilantro, queso fresco and fresh lime juice. (If you’re eating healthier, you could crumble some baked tortilla chips into your soup  instead of adding the fried strips, but you’d probably be better off just pretending the strips are made out of tofu. They’re really good.)

I love that every bowl can be different. You can use the garnishes suggested in the recipe or raid your fridge and pantry for other possibilities, like canned chipotles in adobo (to add to the simmering stock), diced tomatoes, pico de gallo, canned beans, Cheddar cheese, sour cream – whatever sounds good to you.

The soup does take time – about 45 minutes to cook the chicken and an additional hour to reduce the broth – but that’s not active time in the kitchen. As long as you remember to skim the pot every once in a while, you can be in the next room, reading or binge-watching Orange Is the New Black while it does its thing. Or call some friends to BYOB (Bring Your Own Bowl) and help you eat all this soup.