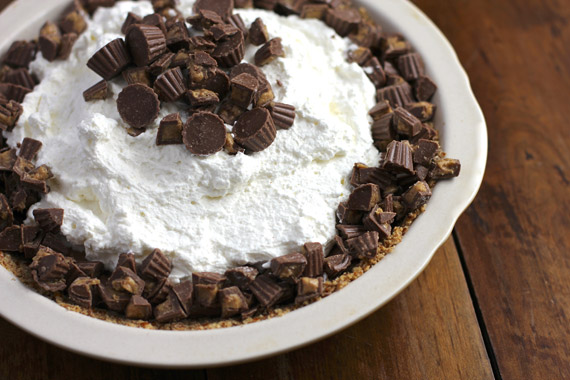 This post is sponsored by Hershey’s Spreads. Spread possibilities!

So, I’ve been messing around with these Hershey’s Spreads for almost two months, and I’ve finally found something I like to use it for even more than spreading it on things. Or just sucking it off a spoon.

Usually I’d make a chocolate icebox pie filling by bringing the chocolate chips and other ingredients to a boil on the stovetop and letting the mixture cool in my pie crust overnight. But with the Hershey’s Spreads, you can combine it with some softened cream cheese and sweetened whipped cream and have your pie filling done in a matter of minutes. No heat required. And since the filling’s not a boiling liquid, you can taste it and play around with the flavor. If it’s not chocolatey enough, you can stir in another spoonful of Hershey’s spread. Or add a little Kahlua. Or peanut butter.

The other nice thing about not dealing with a scorching filling is that you don’t have to wait overnight to dig in. I chilled my pie for about four hours, just to give it time to set and make the slicing easier, but you could grab a spoon and serve it up much sooner.

So, are you ready to experiment with some of this stuff yourself? Hershey’s wants to send a kit with all three spreads (chocolate, chocolate with almond, and chocolate with hazelnuts) and some snack pairings to one of you.

Answer the following question in the Comments section –

I would looooove some recommendations. A classic, a horror novel, a self-help book, a book club favorite … I read some of everything, usually two or three books at a time, so shout out a favorite read, and you’ll be entered to win a Hershey’s Spreads package with all three spreads, plus an assortment of recommended snack pairings.