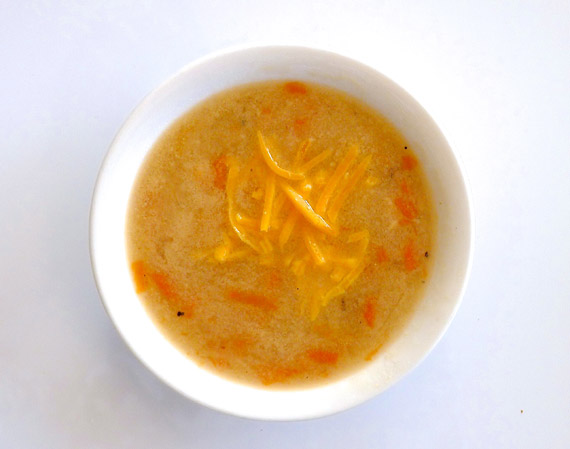 It is cold. Unlike the rest of the country, where there is actual snow, Middle Tennessee has nothing. It’s just cold.

It could only be more unfair if there were still mosquitoes.

Cold weather makes me want soup. Chili, stew, creams of, or stock-based. This latest blast has me craving potato soup. Thick and hearty. A vehicle for cheese and bacon.

I have tried a few potato soup recipes, but I always come back to my Old Trusty – the classic Weight Watchers Skinny Potato Soup – but I like to add more veggies, like grated carrot, broccoli florets or chopped cauliflower. This soup can be made on the stovetop or in a crockpot. It’s versatile and forgiving. Since the flavor is not overpowering, you can spice it up as you wish. Basically anything you’d put on a baked potato will work.

The original recipe calls for a bag of hash browns, but I usually just run some potatoes (peels on, for fiber) through my food processor. I use a pound-and-a-half and squeeze out the liquid. If you decide to add other veggies, make sure to grate or slice them up very small so they cook tender.

For some variety, add up to 1 cup of grated carrot, broccoli florets or chopped cauliflower along with the hash browns. Or, top it with a little bacon and shredded cheese for a light loaded potato soup.

For the Slow-Cooker: Place all ingredients in your slow-cooker, and cook for 4 hours on High.