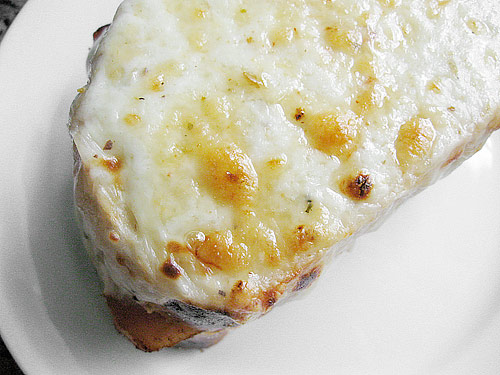 I got 11 cheeses in my fridge, and Gruyere ain’t one. So, I knew I was going to have to change today’s Barefoot Bloggers recipe: Ina Garten’s version of the traditional Croque Monsieur (which we’ll loosely translate as “Mr. Crunch”). A grilled ham and Gruyere sandwich slathered in a Gruyere Mornay sauce and topped with … Gruyere. Gruyere City.

But last weekend, I went to Whole Foods, and they had a hunk of Habanero Cheddar the size of a butcher block in the produce section. And that hunk of Habanero spoke to me just as surely as the burning bush spoke to Moses, and it said, “Verily, the sandwich of destiny is the Croque Señor. Make it so. Habanero out.”

So, I went home and toasted some baguette slices, used them to make ham and Habanero Cheddar sandwiches, topped those sandwiches with a Habanero Cheddar Mornay sauce and sprinkled EVEN MORE Habanero Cheddar over each one. Then they went into the oven to broil until the magnificently cheesy topping was all bubbly and golden, and the air was thick with the scent of spicy, spicy cheddar. And it was goooooood. Crunchy and gooey, rich and soul-burning.

A sandwich that required a knife, a fork and a very large Mason jar full of ice water.

Can’t wait to make them again.